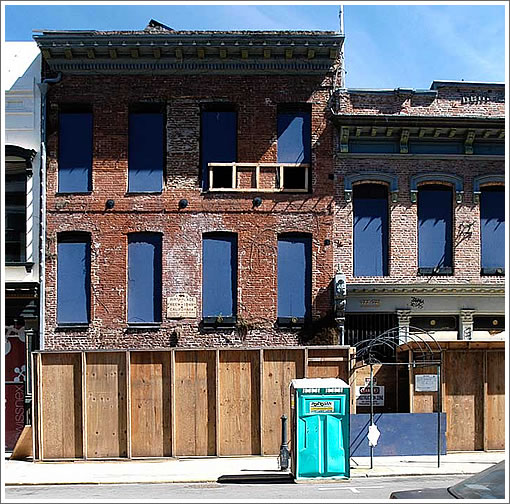 As Melvin Belli’s one time Gold Coast home still seeks a buyer, over the past month the infamous and Landmark Belli Building at 722-728 Montgomery has been doing the same.

The flamboyant and influential Belli was a pivotal figure in today’s litigious society as an innovator in the area of personal injury law. He took on big corporations and controversial clients. Belli’s clients included Errol Flynn, Jim and Tammy Faye Baker, Lana Turner, Mae West, Muhammad Ali, and Jack Ruby.

The Gold Rush era building at 722 Montgomery Street is a historical landmark and the offices where the renowned attorney held court. Eventually reduced to a ramshackle, the offices were once a monument to Belli’s $60 million success. Belli died in 1996 at the age of 88, just a few months after filing for bankruptcy.

Particularly galling to San Franciscans is the fact that Mrs. Belli, who announced the ground breaking for a Belli museum on the site in 1997, sat on the San Francisco Landmarks Preservation Advisory Board while she allowed the Belli building fall into ruin.

An ongoing rebuild of the Belli building is still under wraps, and if finished as planned would yield 11,615 square feet of commercial space, 12,098 square feet of residential space (configured as 12 condos), and a 4,639 square foot basement. 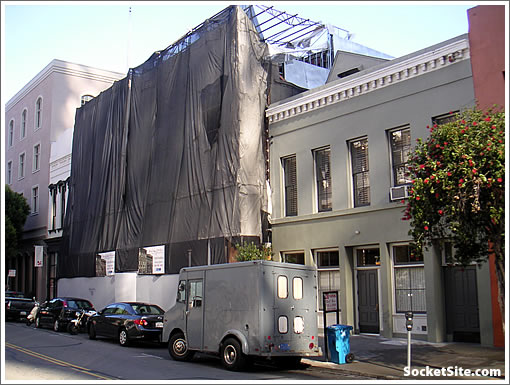 Asking $10,500,000 in its current condition, the Loopnet listing created on October first notes, “This property will not last, Family has asked for it to be sold in as is condition within the next 30 days.” Okay, so maybe 60. And under ten.
UPDATE (11/17): A plugged-in reader adds:

Perhaps the motivation for this statement [(“Family has asked for it to be sold in as is condition within the next 30 days”)] was the [Notice of Default] filed on September 24. Ms. Belli recently (end of August) sold off two units at 481 Clementina. Evidently, she did not raise enough capital to prevent the mechanics lien on November 4 for the Montgomery property. And, of course, the requisite lawsuit by the builders.

And On His Little San Francisco Farm He Grew...A Short Sale

Down on Nob Hill at Gramercy Towers (1177 California)