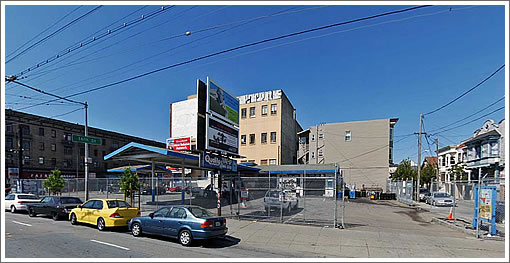 The parcel, at South Van Ness and 16th Street, is zoned for up to 50 housing units under the Eastern Neighborhoods rezoning that was completed last year, according to Al Clifford of Gordon-Clifford Realty, who represented the seller.

The deal was a creative 1031 “direct exchange” between JCN Development and the seller, a family trust that has owned the property for decades. Here is how the exchange worked: Naughton’s group bought the development site. The seller then turned around and invested the proceeds in three condominiums in another project Naughton’s group built, the 29-unit Greenwich at 1501 Greenwich St. Both parties made out pretty well, Clifford said. The trust received handsome condos that will generate steady rental income, while JCN not only was able to sell out the three remaining units of the Greenwich, but also received a parcel that — when the market improves down the road — could be a development site.

The land was originally listed at $4.5 million. Elizabeth Moore, Shamrock’s project manager for development, said the South Van Ness project would be housing over retail.