SocketSite’s Straight Scoop On The Collapse Of Cubix (766 Harrison) 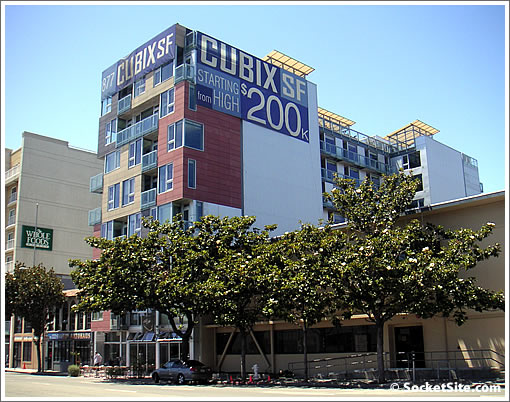 As a plugged-in reader noted this morning, the sales office at Cubix (766 Harrison) never managed to re-organize and re-open and a trustee sale of the unsold condos is scheduled for the courthouse steps this afternoon at 2 p.m. The outstanding developer’s loan balance on the building is $21,050,440.

According to our sources the loan balance is split roughly two-thirds ($14M) on a first and one-third ($7M) on a second, today’s trustee sale is likely a move to simply wipe out the second, and the unsold inventory includes 80 of the 98 residential units and the commercial space (i.e., 18 of the condos, including 7 BMRs, actually sold).

We know of at least one pre-emptive offer that was made and rejected for the units. And as an aside, Temecula Valley Bank which holds the first has been taken over by the FDIC.

UPDATE: With an opening bid of $5,000,000 but no bidders, the auction of Cubix likely played out as planned (as written above “today’s trustee sale is likely a move to simply wipe out the second”). And as a plugged-in reader correctly notes:

“As I suspected, you could not have bought it for 5 million as the trustee had instructions to check back with the lender if any bidders came to the the starting price. BTW, my source says George Hauser (developer) made an appearance at the steps.”

May S&P/Case-Shiller: San Francisco MSA Top Tier Up, Bottom Down

A Commercial Quote With Residential Relevance?