2655 Bush Street: Designs For Density On The Corner Of Divisadero 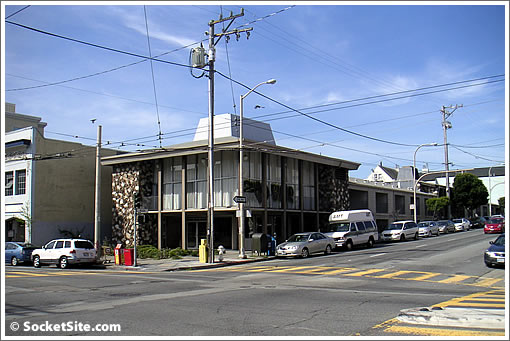 Assuming a conditional use authorization to allow for the development of over one-half acre in addition to all the other requisite approvals, the vacant two-story and 48,000 square foot convalescent facility at 2655 Bush Street (corner of Divisadero) would be razed.
In its place a 108,000 square foot mixed-use building providing 83 new residential units, 4,500 square feet of ground level retail (four and one-half times the current) and below-grade parking for up to 99 cars (again, four and one-half times the current) would rise.

As proposed the new building would range from four to six stories (40 to 65 feet) in height and contain a unit mix of one studio, 19 one-bedrooms, and 63 two-bedroom units.

Architecture by Forum Design, and yes, we’re working on some better renderings but at least you can click the image directly above to enlarge (a little).

Skate Design Or Die: Pushing The Envelope On 264 Clipper Street