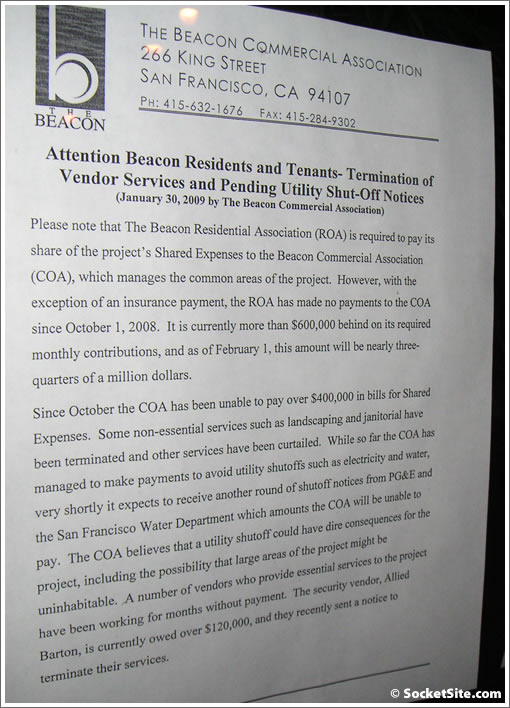 It’s a pluged-in tipster that directs us to the notices hung in the windows of The Beacon Commercial Association at 266 King (the former Beacon sales office). From the notice:

Please note that the Beacon Residential Association (ROA) is required to pay its share of the project’s Shared Expenses to the Beacon Commercial Association (COA), which manages the common areas of the project. However, with the exception of an insurance payment, the ROA has made no payments to the COA since October 1, 2008. It is currently more than $600,000 behind on its required monthly contributions, and as of February 1, this amount will be nearly three-quarters of a million dollars.

Apparently some “non-essential” building services such as landscaping and janitorial have been terminated, the security vendor has sent a notice to terminate their services, and shutoff notices from PG&E and the San Francisco Water Department have been building up.

The COA believes that a utility shutoff could have dire consequences for the project, including the possibility that large areas of the project might be uninhabitable.

The Beacon Commercial Association is purposely spreading disinformation to get leverage in an ongoing spat against the Homeowner’s Association regarding the proper allocation of association fees.

Basically, the two sides disagree on how much the HOA is supposed to contribute to the shared budget. My (imperfect) understanding is that the HOA has been overpaying for years because of sloppy accounting by the previous property management company who was used by both the COA and HOA, but favored the COA over the HOA.

Anyway, so the two sides are in mediation or arbitration to figure out who owes what. In the meantime, the HOA has repeatedly offered to pay its share of the budget for stuff like PG&E and the water bill. The COA, however, has refused to accept any payment from the HOA unless the HOA pays the entire monthly association fee that the COA unilateraly contends is owed.

And then the COA turns around and says that the HOA is not picking up the slack on the bills, when in reality, the COA is not letting the HOA pay them in the first place. I believe I heard the HOA has tried to pay PG&E directly, but PG&E didn’t want that arrangement for some reason.

This is actually the second time the COA has done this disinformation campaign. The first was over the Christmas holidays, when it posted notices around the Beacon that our gas and water might be turned off at any time due to this “non-payment” issue.