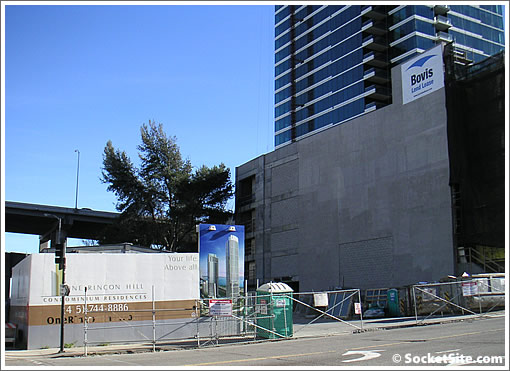 So here’s the SocketSite straight scoop on what’s happening with One Rincon Hill’s tower two and why it hasn’t yet broken ground (despite a highly publicized January start).
One: Decreasing volatility in the construction materials market resulted in an opportunist delay in purchasing until the plans for One Rincon Hill’s tower two were finalized. As far as we know those plans weren’t submitted to the city until earlier this week. And the delay in purchasing allowed the developers to save some cash. That’s their story.
Two: While we actually have no doubt that the second tower will be built (although considering the current state of the credit markets, never say never), there is some doubt in who’s going to be doing the actual building (not in terms of the developer, but rather the contactor). Despite the fact that Bovis continues to work on tower one, the contract for tower two was put out to bid with two other players (Webcor and Swinerton). Bovis might be the incumbent, but as far as we know the contract hasn’t officially been awarded. And that’s ours (story).
The official groundbreaking and a quick construction start are now expected to occur at the end of April or beginning of May, but if it’s not Bovis doing the building we’d count on some additional slippage as a new contractor gets up to speed.

Another Look At 1420 Douglass (And A Reader's "Lazy Noe Indicator")