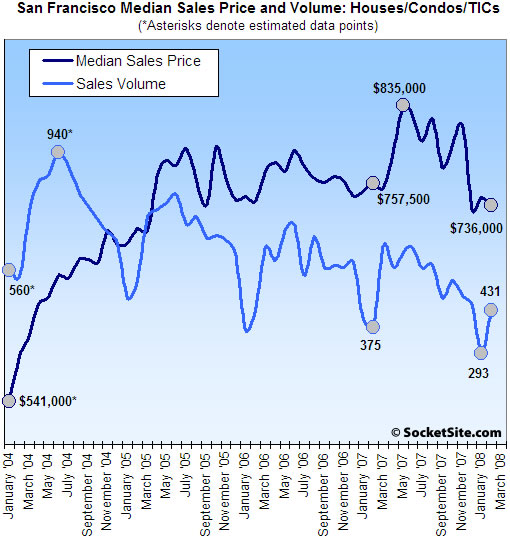 According to DataQuick, home sales volume in San Francisco jumped 14.9% on a year-over-year basis last month (431 recorded sales in February ’08 versus 375 sales in February ‘07) and jumped 47.1% compared to the month prior (293 recorded sales in January ‘08). And while a general increase in reported sales activity in San Francisco shouldn’t catch any plugged-in readers by surprise (we noted the upward trend two weeks ago, and of course seasonality is in effect with respect to month-over-month gains), the magnitude of the increase is sure to raise an eyebrow or two (as it should).
Keep in mind, however, that DataQuick reports recorded sales which not only includes activity in new developments, but contracts that were signed (sold?) many months or even years prior and are just now closing escrow (or being recorded). The sales reports from the San Francisco Association of Realtors will likely paint a very different picture in terms of February market activity (down ~22% according to one plugged-in reader). And it does raise the question of whether or not new developments are “stealing” transactions from the existing condo market.
The median sales price in February was $736,000, down 2.8% compared to February ’07 ($757,500) and down 1.1% compared to the month prior. That being said, we continue to see mix playing a significant role in supporting the median sales price in San Francisco.
For the greater Bay Area, sales volume in February was down 36.7% on a year-over-year basis but increased 11.2% from the month prior (3,989 recorded sales in February ’08 versus 6,305 in February ’07 and 3,586 this past January). The recorded median sales price fell 11.6% on a year-over-year basis and was down 0.4% compared to the month prior.
At the extreme, Alameda recorded a 44.5% year-over-year reduction in sales volume (a loss of 603 transactions) and a 16.8% drop in median sales price. And outside of San Francisco no Bay Area county reported a drop of less than 35% in sales volume, and not a single Bay Area county reported a positive change in Median Sales Price (with both Sonoma and Solano reporting drops of over 20%).
∙ Bay Area home sales remain at two-decade low [DataQuick]
∙ San Francisco Sales Activity In January: Down Again (-27.1% YOY) [SocketSite]
∙ SocketSite’s San Francisco Listed Housing Inventory Update: 3/03/08 [SocketSite]
∙ Infinity And One Rincon Hill: Closings By The Numbers To Date (2/29) [SocketSite]

Caution: Views From ORH Not Exactly As They Appear In This Photo

The Only Appropriate Headline: “What The Hell Were They Thinking?”