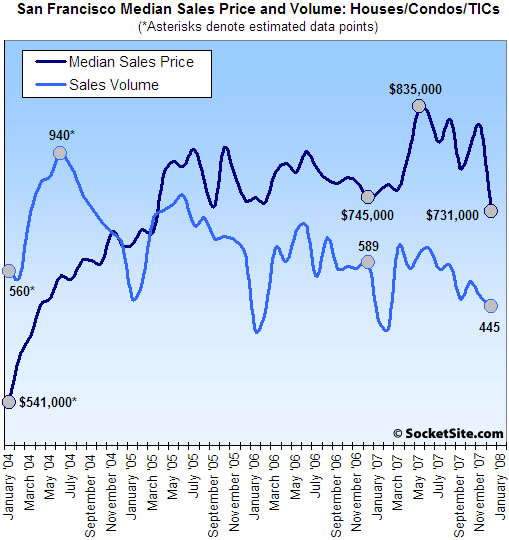 Last month was the slowest December is DataQuick’s statistics, which go back to 1988. Sales have decreased on a year-over-year basis for 35 consecutive months. Until last month, the slowest December was in 1990, when 5,458 homes sold. The strongest December, in 2003, saw 12,349 sales. The average for the month is 8,903.

At the extremes, Sonoma recorded a 48.5% year-over-year reduction in sales volume and a 21.9% drop in median sales price, while Napa was the best performing Bay Area county with no change (0.0%) in it’s Median Sales Price (but a 43.3% drop in sales volume).
∙ Bay Area home sales drag along bottom, median price back to 2005 [DataQuick]
∙ San Francisco Sales Activity In November: Back Down (-15.7% YOY) [SocketSite]