From J.K. Dineen at the San Francisco Business Times: “Parkmerced’s owners want to add 5,700 housing units to San Francisco’s largest apartment complex in a dramatic redesign that would cost billions of dollars and nearly triple the west side community to 9,000 units.
Stellar Management and Rockpoint Group’s aggressive plan calls for the construction of between 200 and 300 units a year over the next 15 to 20 years. The owners plan to file an application for environmental review with the city before the end of the year, according to spokesman P.J. Johnston.
The proposal, as envisioned by architects Skidmore Owings Merrill, would reinvent the automobile-centric World War II-era community as a denser, more pedestrian-oriented neighborhood with a new transit stop, parks, and grocery shopping. Ten of the 11 existing 13-story towers would be preserved. Approximately 70 percent of the 5,700 new units would be in townhouses of three or four stories. Others would be in new towers up to 13 stories. The housing will include a mixture of rental apartments and for-sale condos.” 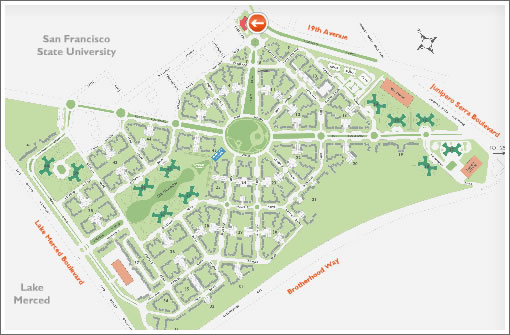 “The heart of the future Parkmerced would be a new Muni station. The developers are proposing to bankroll moving the San Francisco State University Muni station from 19th Ave. and Holloway, considered one of the city’s most dangerous intersections, onto the Parkmerced property. The new station would be built on Crespi Drive and would be integrated into a Parkmerced village center with a grocery store, farmers’ market, cafe, and other small shops. The owners are also considering adding one or two more Muni stops on the 110-acre property.”
“The Stellar/Rockpoint scheme calls for a number of extreme green measures. Some, like narrower streets with bike and walking paths, are commonplace. Others are more unusual, like a plan to remove the entire property off the city’s power grid and instead generate electricity through wind turbines and microturbines that operate on a variety of gaseous or liquid fuels and emit very low emissions. Skidmore’s design partner for the project, Craig Hartman, said cleantech advances can reduce energy consumption by 62 percent per household. A highly-efficient plumbing system and a new water recycling plant could reduce water and sewer consumption by 43 percent per home, he said.”
∙ Huge housing plan to add 5,700 units [Business Times]
∙ Parkmerced [parkmerced.com]

While One Marina Data Point Closes Escrow, Another Is Withdrawn

San Francisco Sales Activity In November: Back Down (-15.7% YOY)