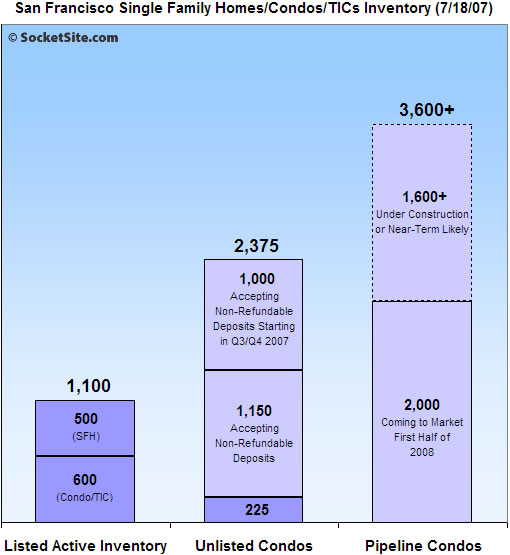 Once again, if you’re truly plugged-in you’re already familiar with SocketSite’s Complete Inventory Index (Cii) for San Francisco. But if you’re not:

We’re now tracking the size, status, probability, and available inventory for nearly 200 new developments throughout San Francisco (20,000+ condominiums in total). And we’re keeping tabs on another 15,000+ “net new housing units” (including rental units) that are either proposed or on the drawing boards. All told, it’s a potential inventory of 35,000+ housing units (i.e., the majority of San Francisco’s overall housing pipeline).
As it stands, in addition to the roughly 600 San Francisco condominiums (and 500 single family homes) that are listed and available for sale on the San Francisco MLS, we estimate that there are approximately 225 new condominiums that are not listed, but are currently available for purchase and occupancy. These condos include unlisted inventory in buildings ranging in size from 310 Townsend to The Palms.
We also estimate that there are currently an additional 1,150 condominiums that are actively competing for the attention of buyers and accepting non-refundable deposits in sales offices throughout San Francisco (examples include The Infinity, The Potrero, and The Hayes). And within the next six months, we expect to see an additional 1,000 condominiums begin marketing, accepting deposits, and competing for sales as well (think The Millennium, SF BLU, and Esprit Park).
Looking forward to 2008 we see an additional 2,000 new condominiums that are likely to start marketing/selling in the first half of the year (or relatively soon thereafter). And another 1,600+ that have a shot of making it to market in the second half of 2008. At the same time, keep in mind that at least 1,000 units have fallen out of the pipeline over the past six months (think 250 Brannan or Rincon Towers).
Beyond that (and for building by building updates) you’ll just have to keep plugging in.
∙ SocketSite’s Complete Inventory Index (Cii) [SocketSite]
∙ 310 Townsend: Two New Listings, (At Least) One New Price [SocketSite]
∙ The Palms: Financing Incentives And Inventory Update [SocketSite]
∙ An Incomplete History Of Prices At The Infinity [SocketSite]
∙ The Potrero: South Building Sales (And Incentives) This Weekend [SocketSite]
∙ The Hayes (55 Page): A Plugged In Buyer’s Facts (And Opinion) [SocketSite]
∙ Millennium Tower: Sales Timeline, Additional Details And Renderings [SocketSite]
∙ 631 Folsom: Recently Christened “SF BLŪ” (And Down To 108 Units) [SocketSite]
∙ Esprit Park (900 Minnesota): The Website (Sales Office This Summer) [SocketSite]
∙ An Ode To Offices Or A Rethinking Of Residential? [SocketSite]
∙ Rincon Towers: From Apartments, To Condos, To Apartments [SocketSite]

Why Not Include The Living Room And Just Call It An Even Three?