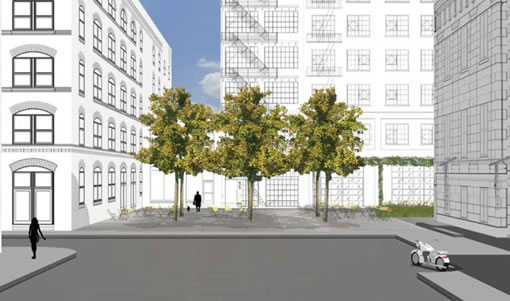 As we wrote five months ago: “If all goes as proposed, the ‘290-by 54-foot-wide portion of Jessie Street extending between 5th Street and Mint Street’ (off Mission) will be transformed into Mint Plaza – an automobile free pedestrian plaza lined by cafés, restaurants, and bars.”
And as we write today: the plan has been approved, the street should be closed in two weeks, construction should begin by the end of the month, and we (San Francisco that is) should have a new pedestrian plaza by the end of September.
And as you might have already heard, Chez Papa is definitely coming to the plaza (replacing what is now the Mint Lounge at 414 Jessie). And as far as we know (although we’re sure some plugged-in reader knows better), the Castillo family (think Limon in the Mission) remains in discussions to open a nuevo-Peruvian place on the plaza as well (418 Jessie).
In related news, the Mint Collection (a.k.a. Mint Lofts) sales office has officially opened its doors to the public.
∙ Mint Plaza (And Livable City) [SocketSite]
∙ Mint Plaza [San Francisco]
∙ The Mint Lofts: The SocketSite Scoop, Update And (Some) Pricing [SocketSite]