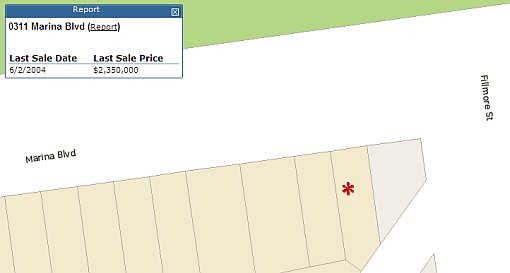 Forget that rogue sea lion, it’s the shark that captures all of our attention today. PropertyShark added free foreclosure listings for San Francisco to its site this afternoon (fourteen currently listed).
For example, according to PropertyShark, 311 Marina Blvd last changed hands on 6/2/2004 for $2,350,000 and the property was refinanced on 6/14/2005 using two variable rate loans (one for $1,950,000 and another for $530,000). The property is currently in foreclosure (with an estimated unpaid balance of $327,573.97) and will be auctioned off on 11/27/2006 at City Hall.
At the other end of the spectrum is 3018 Casto Street which was purchased on 11/09/2005 with a $569,000 variable rate mortgage. A year later, the current unpaid balance on the loan is now $609,014.48 and the property is scheduled to be auctioned off on 12/04/2006 (once again, at City Hall).
If you’re not familiar with PropertyShark you’ll probably be a bit shocked by the depth and breadth of information that’s available for the vast majority of residential and commercial properties in San Francisco (not just foreclosures). Also added to the PropertyShark site today, a number of San Francisco property maps including land use and property outlines.
∙ Rogue sea lion in S.F. menaces swimmers [SFGate]
∙ Circling The Waters [SocketSite]
∙ PropertyShark: San Francisco Foreclosures [propertyshark.com]
∙ PropertyShark: San Francisco Maps [propertyshark.com]

One Rincon Hill Meet And Greet