An Overview Of Mission Bay 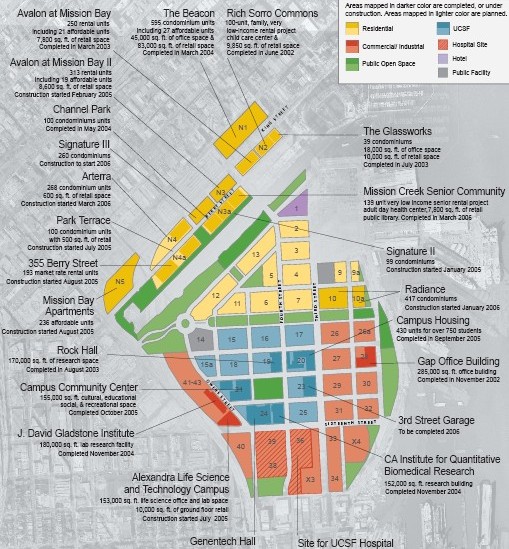 Our posts on 255 Berry and the Park Terrace generated some fantastic reader comments (thank you!) with regard to the genesis, evolution, and future of Mission Bay. And while we were going to save a Mission Bay specific post for tomorrow, our readers seem to be a couple of steps ahead (so we’ll try to catch up).
As mentioned, the San Francisco Redevelopment Agency website provides a great primer on the development of Mission Bay which was driven by the Catellus Development Corporation (a spin-off from Southern Pacific) and the City of San Francisco, while West Coast TNDs (“Traditionally Designed Neighborhoods”) provides an interesting profile of the neighborhood:

Mission Bay is a diverse 303-acre mixed-use development located about one mile south of downtown San Francisco that involves the conversion of a former Southern Pacific railyard that once served the city’s ports into a new neighborhood with 6,000 residential units, 800,000 square feet of retail, a 500-unit hotel, a university medical campus and a bio-technology center. In its present state, it is best considered as four separate components—(1) a group of residences and office buildings north of the Mission Creek estuary (next to the SF Giants’ baseball stadium), (2) a huge open area just south of the estuary that someday will be the site for the hotel and about half of the residential units, (3) the UCSF (University of California, San Francisco) medical campus that hopefully will attract private companies and research groups to occupy (4) the corporate science and technology campus at Mission Bay’s southern end.