The State Of The Brannan 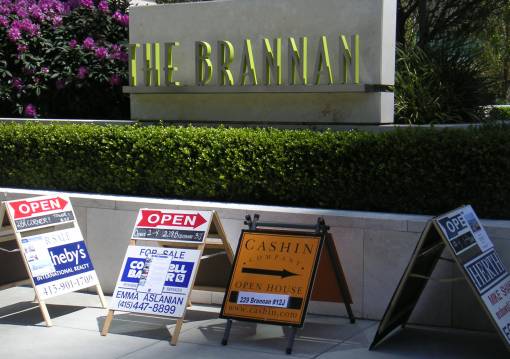 As foundations are poured, sales offices are opened, and new developments start hitting the market, questions abound about the impact on existing buildings about town (especially with regard to premium priced buildings like The Brannan).
And while eight open houses signs lining the street, and twelve active listings on the MLS (including the “Architect’s Residence” #16D) for The Brannan might appear somewhat dramatic, it’s really not. For perspective, there are 336 units in the three buildings that comprise The Brannan, which means that less than 4% of the building’s units are currently for sale.
Now granted, from what we’re told it’s taking 60% longer to sell a unit in The Brannan this year versus last year (70 days on the market versus 42), but we believe that this reflects an overall slowing of the market rather than any particular weakness in The Brannan.
∙ Listing: 219 Brannan #16D (2/2) – $2,150,000 [MLS]

A Most Unfortunate Quote