Bathroom (And Market) Of The Rich And Famous 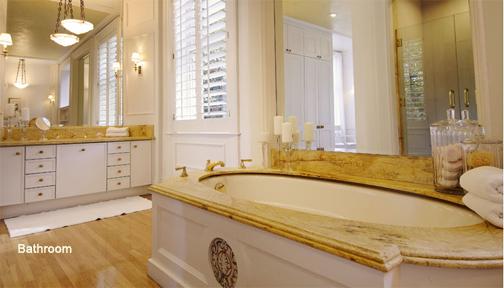 In 1995, the house at 2460 Lyon was a Decorator Showcase property and on the market for $6 million. Eleven years later, and at a price of $16.5 million (the highest recorded sale last quarter), it’s the new home of Richard Blum and wife Sen. Dianne Feinstein (that’s the “Hers” tub above). How’d we know? Say hello to SFluxe (which is not a SocketSite production).
Operating under the tag line “Living well in San Francisco,” SFluxe aims to become a celebration of “luxury living in San Francisco – homes, cars, boats, art, etc.” It’s obviously still in its uber-infancy, and we’re not sure we like where they’re going with their celebration of cars (we’re not fans of the Elise), but once the site gets rolling you can be sure that we’ll be keeping a close eye on their real estate coverage (and keeping you ‘plugged in’).
And with regard to the high-end San Francisco market: “The high-end housing market in San Francisco during the first quarter showed little change from the same period a year ago. During the period, 69 homes sold from $1.5 million to $2.499 million, compared with 80 a year ago, while 21 homes in the quarter sold for more than $2.5 million, compared with 24 during the first quarter of 2005. The median sale price increased slightly for the homes sold at $2.5 million or greater, to $3.4 million versus $3.225 million in same quarter a year ago. . . . Inventory of homes for sale above $1.5 million is similar to a year ago, with 128 on the market at the end of March this year, versus 130 for sale at this benchmark price point a year ago.” (RISMedia)
∙ Now That’s How To Flip Renovate! [SocketSite]
∙ SF Luxury Housing Market Unchanged [SFluxe]
∙ High-End Home Sales Show Signs of Fatigue in Northern California [RISMedia]