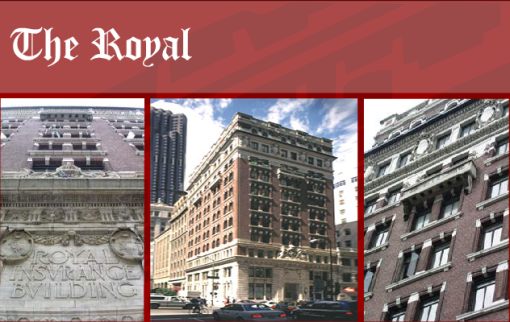 The Royal Insurance Building at 201 Sansome Street was built in 1907 for the Royal Globe Insurance Company, and after ninety-nine years, it’s going residential. Designed by New York City architects, Howell and Stokes, the building was designated a San Francisco Landmark in 1983 (the exterior of the building has not been altered during the conversion to condos).

The Royal (not to be confused with the Royal Towers) is comprised of forty-six (46) residences with one bedrooms starting from $430,000, two bedrooms from $940,000, and four two-story “townhouses” from $1,575,000. High-end finishes throughout, and discounted gym membership (Equinox) and parking (down the block) for residents of the building.

Unfortunately, the majority of the units have already been pre-sold (according to the developer), but as Damion Matthews points out, you still have two days to register for the five BMR units available in the building (April 21st deadline). Plus, we wouldn’t be too surprised to see some early speculative turnover once the doors have been flung open.

And while The Royal’s website might not win any awards for its aesthetic design, we give it two thumbs up for information (including complete pricing), interactivity (floorplans), and honesty (actually identifying BMR units).

What, No Pictures Of Gore?