There Are Not 40,000 Vacant Homes in San Francisco 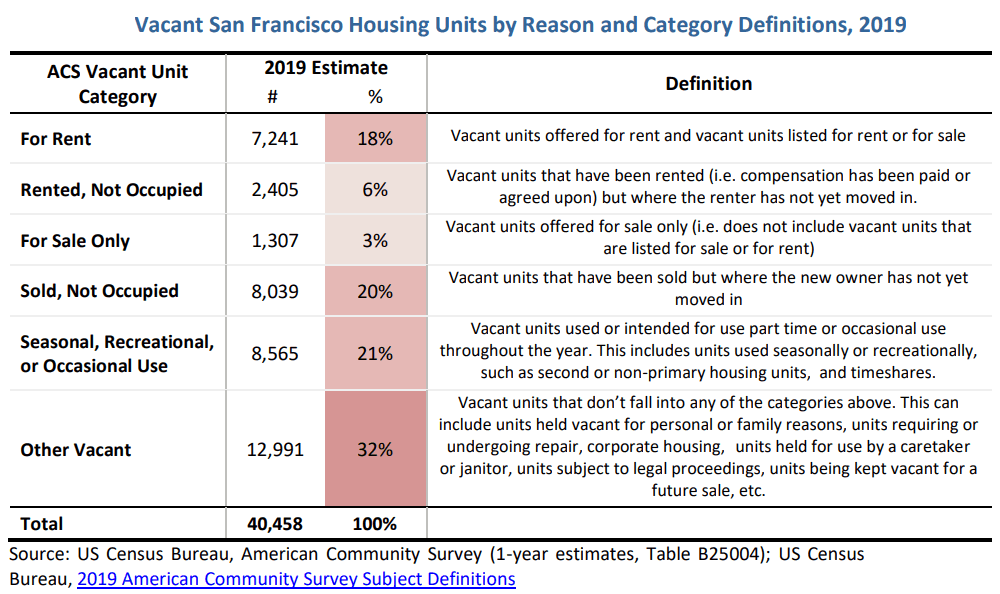 While it makes for good headlines and viral sound bites, the notion that there are “more than 40,000 vacant homes in San Francisco” is not only misleading but represents a fundamental misunderstanding, if not misrepresentation, of the underlying data and market at hand.

Yes, 40,458 units of housing in San Francisco were classified as “vacant” in the U.S. Census Bureau’s American Community Survey (ACS) for 2019. But the devil is in the details, methodology and footnotes.

First of all, an occupied unit is actually classified as “vacant” for the purposes of the ACS if the person living in the unit is planning to move within two months of being surveyed. On top of that, a unit that has been already been rented to a new tenant, but the new tenant hasn’t yet completed their move, is also considered “vacant.” And along with all the units that are actively being offered for rent or for sale, over a quarter of the “vacant” units in San Francisco are simply markers of normal turnover.

Second homes, including pieds-à-terre maintained by people who work in the city but live elsewhere, are also classified as “vacant,” even if they’re frequently occupied during the week or on weekends. And 21 percent of those “40,000 vacant units in San Francisco” were seasonal, recreational, or occasional use (i.e., second/third/fourth) homes.

Twenty (20) percent of the “40,000 vacant units in San Francisco” are units that hadn’t yet been reoccupied since trading ownership, but that included units that were in the process of being renovated, either to flip, rent or be occupied by their new owners.

The remaining 32 percent of the “vacant” units in San Francisco included those that were occupied but used for corporate housing or short-term rentals; units that were in the process of undergoing needed repairs; units that were being prepared for a sale or change in ownership; and a host of “other” reasons as well.

All told, 10.0 percent of San Francisco’s housing units were classified as “vacant” per the ACS in 2019. And while that’s “up from 8.5 percent in 2015,” having dropped from 10.8 percent in 2010, it was right in line with a median vacancy rate of 9.7 percent for nine of San Francisco’s peer counties, per the City’s recent Residential Vacancy Report that was produced for Supervisor Preston. 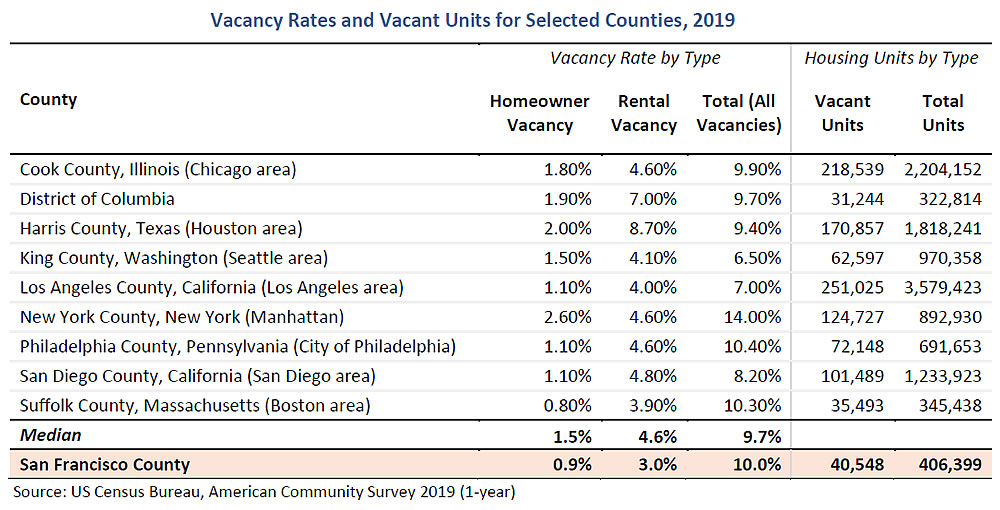 Keep in mind that the average ACS vacancy rate in San Francisco was 9.95 percent from 2005 to 2010 as well, as broken down by a plugged-in reader nearly a decade ago.

The Lenders Take a Loss in Saint Francis Wood