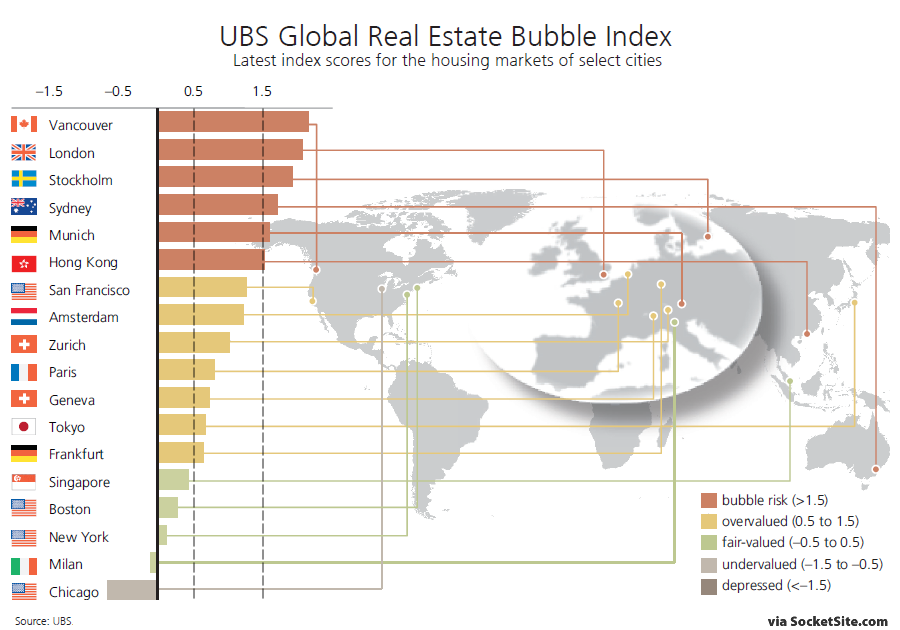 According to UBS Wealth Management’s Global Real Estate Bubble Index, the residential real estate market in San Francisco is increasingly overvalued and approaching bubble territory, while New York and Boston remain fairly valued and Chicago is undervalued, as was the case at the same time last year.

The index is based on a comparison of current price-to-income (PI) and price-to-rent (PR) ratios in each of the cities versus their historic norms, with low affordability per PI ratios pointing “to diminished long-term price appreciation prospects” and high PR multiples indicating “a dangerous dependence on low interest rates.”

Vancouver was atop UBS’s list of cities in bubble territory, followed by London, Stockholm, Sydney, Munich and Hong Kong. “What these cities have in common are excessively low interest rates, which are not consistent with the robust performance of the real economy,” said Claudio Saputelli, Head of Global Real Estate in UBS Wealth Management’s Chief Investment Office. “When combined with rigid supply and sustained demand from China, this has produced an “ideal” setting for excesses in house prices.”

And per one of UBS’s Real Estate Economists, “a sharp increase in supply, higher interest rates or shifts in the international flow of capital could trigger a major price correction at any time.”

Keep in mind that UBS’s ranking above isn’t based on a screen of all cities but rather a specific analysis of the select 18. And, “a bubble cannot be proven conclusively unless it bursts, but recurring patterns of property market excesses are observable in the historical data.”