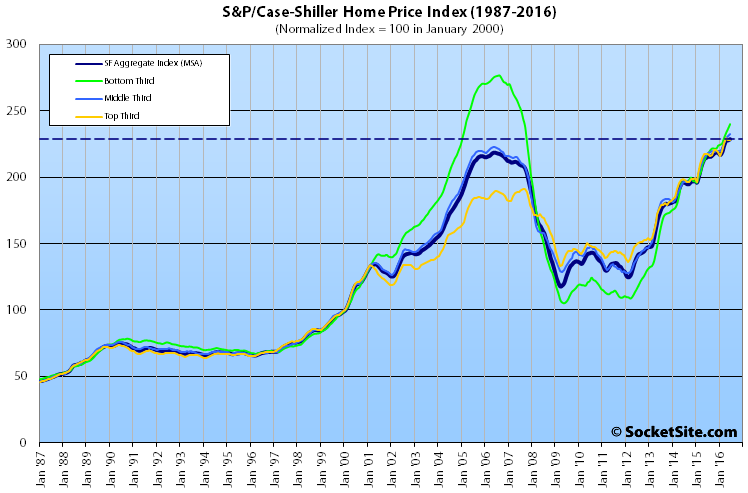 Having effectively stalled in May, the Case-Shiller Index for single-family home values within the San Francisco Metropolitan Area ticked up 0.4 percent in June to a record high, surpassing the previous cycle peak recorded in May of 2006 by 4.6 percent.

At the same time, the year-over-year gain for the index, the pace of which has been on the decline since the third quarter of 2015, measured 6.4 percent in June, the lowest year-over-year gain since the third quarter of 2012. And for the first time since early 2012, the index for Bay Area condo values dropped over a percent as compared to the month before.

The aggregate index bump for San Francisco single-family home values in June was driven by a 1.3 percent month-over-month gain at the bottom third of the market which is now running 10.7 percent higher versus the same time last year and has more than doubled since bottoming in 2009, but it remains 13.0 percent below its 2006 peak.

The middle third of the market gained 0.6 percent in June, is running 7.3 percent higher versus the same time last year, has gained 82 percent since 2009 and is now 4.4 percent above its 2006-era peak.

And while the index for the top-third of the Bay Area market remains 19.3 percent above its previous cycle peak recorded in August 2007, it was unchanged June having slipped in May and its year-over-year gain of 4.9 percent remains the lowest on record since the third quarter of 2012. 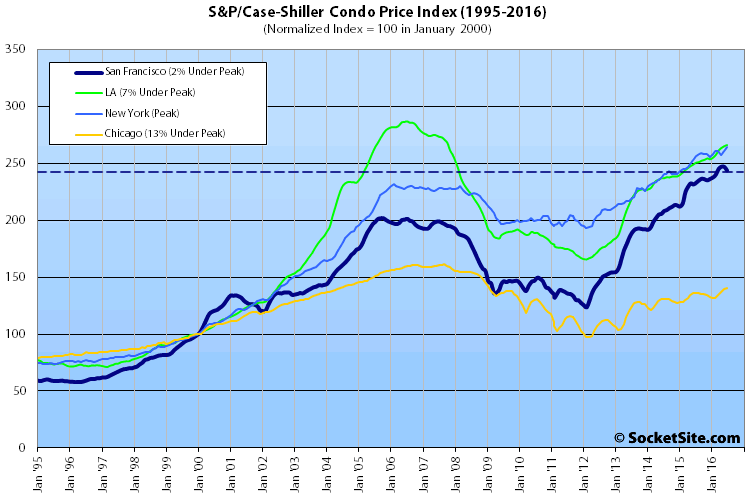 The index for home prices across the nation ticked up 1.0 percent from May to June and is now within 1.2 percent of its July 2006 peak and the index’s year-over-year gain ticked up to 5.1 percent.

And for the fourth month in a row, Portland, Seattle and Denver reported the highest year-over-year gains, up 12.6 percent, 11.0 percent and 9.2 percent respectively.

Planning for a Prime Waterfront Parking Lot Is Underway