With decades-old systems that were not built to withstand the effects of sea level rise, extreme storms, urban flooding nor major seismic events, the San Francisco Bay Area’s businesses, homes and public infrastructure are increasingly at risk.

And in an attempt to develop a unified vision and strategy for ensuring the Bay Area’s “sustainable and resilient future,” San Francisco’s Planning Department is about to launch the Bay Area Resiliency Design Challenge. 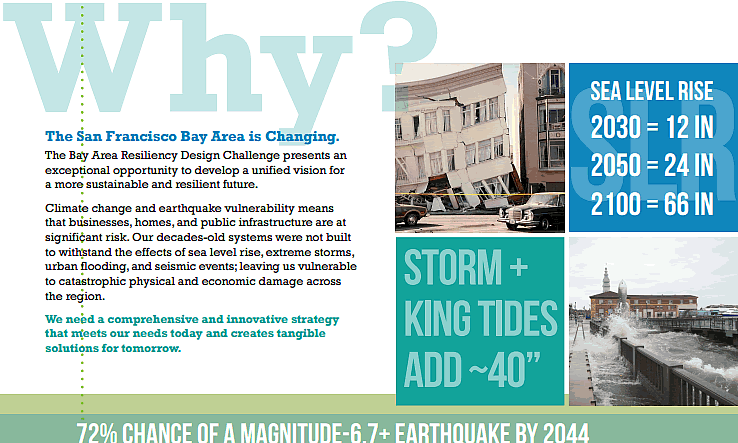 Inspired by New York’s Rebuild by Design initiative, which was launched by President Obama’s Hurricane Sandy Rebuilding Task Force to develop “comprehensive, regional, replicable, and implementable solutions” to mitigate and survive future climate emergencies around New York, the Bay Area Challenge will seek an international roster of interdisciplinary teams with a diversity of design expertise and “approach to resilience” rather than specific solutions to a pre-defined problem.

Once the teams are selected, which should occur around mid-2016, they will begin a three-month local research phase, exploring the “interdependencies of large-scale infrastructure planning, housing, economic development, transportation, tourism, insurance, vulnerable populations, environmental justice, ecology, and conservation.”  A four-month design phase will follow.

And by January 2017, the teams’ designs, finance and implementation plans should be ready for jury review.

A final note from Planning with respect to their approach and intended outcomes:

“Through vigorous community engagement and education, the Design Challenge will work to shift the public’s perception of climate change. In changing the conversation, we will transition the fear and sense of vulnerability surrounding this issue into empowerment and action. Collaborative open forums will capture the public’s imagination and inspire a commitment to new ideas that will be incorporated into final designs.”

Expect an official announcement from the City with respect to the Challenge in the near future.