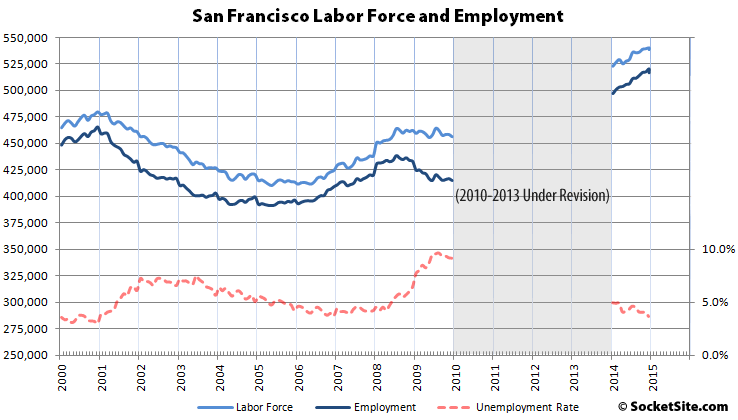 Following a once-a-year benchmarking, a revision to the data which incorporates additional inputs and refined estimation techniques, the unemployment rate in San Francisco is back above 4 percent. But the estimated number of people living in San Francisco who have a job now measures 516,700. That’s 33,900 higher than previously thought.

On an adjusted basis, the number of employed residents of San Francisco actually slipped by 3,800 from December to January, but the count remains 19,600 higher versus the same time last year.

Compared to the end of 2009, the number of employed residents in San Francisco has increased by 101,800, a 25 percent jump in just five years.

And compared to the height of the dot-com peak in December 2000, at which point the unemployment rate in San Francisco measured 3 percent with a labor force of 480,000 (versus an adjusted 538,700 today), there are 51,000 more residents of San Francisco with paychecks than there were before.

On a benchmarked basis, the unemployment rates in Marin and San Mateo both ticked up as well, to 4.0 percent and 3.9 percent respectively, and the unadjusted unemployment rate for California jumped from 6.7 to 7.3 percent.

Lucky 13 Likely To Be Razed For 31 Condos To Rise