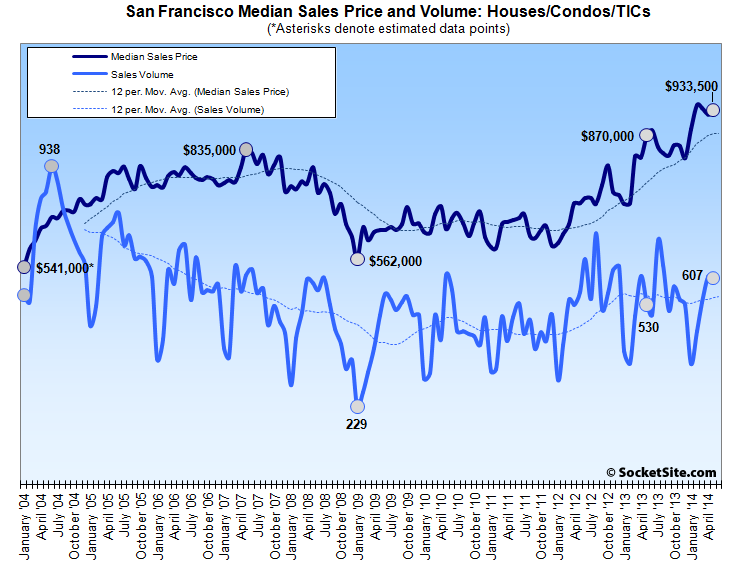 In fact, San Francisco was the only Bay Area county to record a year-over-year gain in sales volume in May.

That being said, at a time when the sales of homes should be increasing based on seasonality, the recorded sales volume in San Francisco dropped 0.8 percent from April to May. Over the past decade, sales volume has increased an average of 12.6 percent over the same period of time.

The median price paid for a property in San Francisco was $933,500 in May, 1.2 percent higher than the month before and 7.3 percent higher year-over-year, but 1.2 percent below the record of $945,000 set in February. The uptick in the median is being driven in part by an increase in the mix of higher priced home sales and new construction.  And as always, keep in mind that while movements in the median sale price are a great measure of what’s in demand and selling, they’re not a great measure of actual appreciation.

At the extremes around the Bay in May, sales volume was 28.2 percent lower on a year-over-year basis in Sonoma (a loss of 193 transactions) while the median price of the properties that sold was 12.8 percent higher. And while the median price paid for a home in Napa was 31.2 percent higher, sales volume dropped 22.3 percent year-over-year, a loss of 29 transactions.

Mortgage Rates Tick Up For Second Week In A Row