The Landmark Loophole And Plan To Convert The SF Design Center 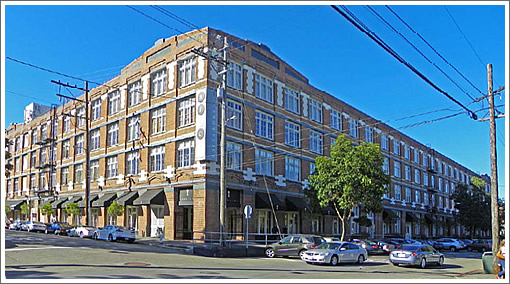 A plan to convert over two-thirds of the San Francisco Design Center at 2 Henry Adams Street from designer showroom space to general office use is in the works, a use which is currently disallowed as the 330,000 square foot building is zoned for Production, Distribution & Repair (PDR).

While the planned conversion flies in the face of a key objective of San Francisco’s recently adopted Showplace Square/Potrero Hill Area Plan, a plan which actively seeks to preserve the supply of PDR space within the district and city, there is a landmark loophole.

As we first reported last year, another key objective of the Showplace Square/Potrero Hill Area Plan is to ensure the economic viability of historically significant buildings, providing an exception for the conversion of such buildings to office use. And as such, the owners of 2 Henry Adams were planning to seek a Landmark Designation for the building which would clear the way for its conversion.

The owners of 2 Henry Adams have since formally filed their request to initiate a landmark designation for the building which was built for the Dunham, Carrigan & Hayden Company in 1915 and served as the corporate offices, warehouse and distribution facility for the company, a wholesale steel and hardware importer/distributor.

Next week, San Francisco’s Historic Preservation Commission is slated to consider the request to landmark the building with a preliminary recommendation to initiate the designation.

Campos Calls For Mayor To Commit To Regulating Tenant Buyouts

Office Rents In San Francisco Are Up 65 Percent Since 2010