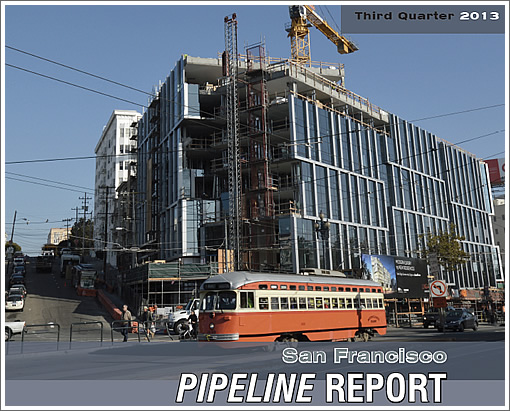 While only 1,600 new housing units were completed in San Francisco over the past year and commercial space in the city declined by 183,000 square feet (due to conversions to residential use), there are now over 6,000 housing units under construction in the City which should hit the market over the next year or two along with 900,000 feet of commercial space.

Building permits for another 9,500 housing units in San Francisco have either been approved or requested, units which should start hitting the market in two to four years along with another 5,000,000 square feet of commercial space.

In addition to the nearly 16,000 housing units which are either under construction, ready to break ground, or waiting for a permit, another 27,000 housing units have been entitled to be built in San Francisco which includes 10,500 units by Candlestick, 7,800 units on Treasure Island and 5,680 units in Park-Merced, projects which still have timelines measured in decades, not years.

A breakdown of the residential developments in the works across San Francisco by neighborhood, not including those at Candlestick, Park-Merced or Treasure Island:

A Game Of Remodeling Jenga: Before The Collapse