The Economics Of Urban Trees 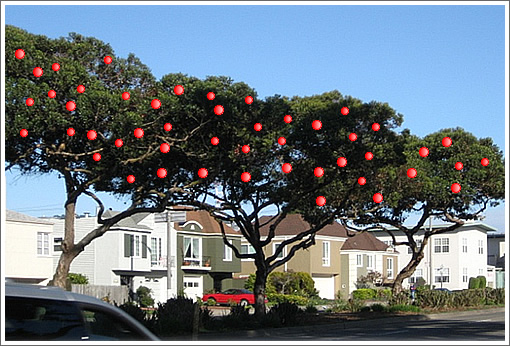 As part of the due diligence for San Francisco’s Urban Forest Plan, an inventory and accounting for 24,858 publicly managed “street trees” was conducted. And while the math is a little fuzzy, especially when it comes to the socioeconomic benefits, each tree was estimated to contribute just under $160 a year in benefits to the community at large.

A breakdown of the estimated economic benefits and accounting per tree:

1. [The 24,858 inventoried] trees reduce electricity and natural gas use in their neighborhoods through shading and climate effects; a benefit totaling $257,418, an average of $10.36 per tree.

3. Trees improve air quality through the absorption and deposition of chemical pollutants. The trees in this inventory remove 5,089 lbs of Ozone, Nitrogen Dioxide, Sulfur Dioxide and particulate matter (PM10) annually for an estimated benefit to the City of $53,360 each year. [Editor’s Note: Biogenic volatile organic compound emissions, especially from Redflower gums, offsets the total air quality benefit by $79,866, for an annual net cost of $0.53 per tree.]

4. San Francisco’s inventoried trees intercept an estimated 19.2 million gallons of storm water annually for a total value of $1,999,994 per year, an average of $80.46 per tree.

5. The total annual benefits contributed by San Francisco’s inventoried trees to property value increases, aesthetics, and socioeconomic value are approximately $1.7 million, an average of $67.52 per tree.

On the expense side, it was estimated that the City of San Francisco currently spends roughly $900,000 per year to maintain the inventoried trees, an average of just over $36 per tree. An accounting for the private investment to maintain the city’s inventory of trees, in terms of time and money, was not included as part of the study.

Another Year On The Market For The Madeover Herbst Manor