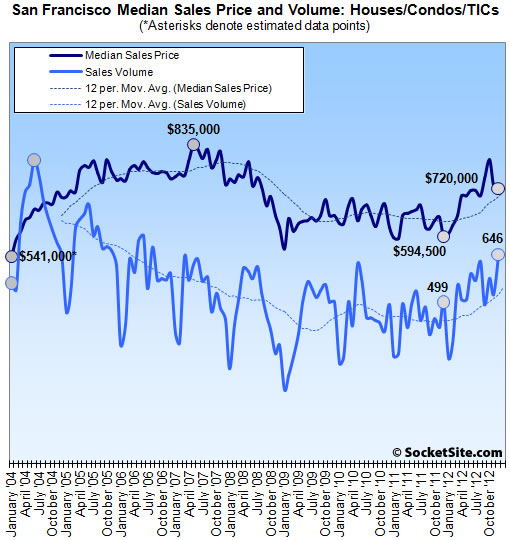 Last month distressed property sales – the combination of foreclosure resales and “short sales” – made up 34.2 percent of the resale market. That was down from 35.5 percent in November and down from 52.4 percent a year ago.

At the extremes, while San Francisco recorded a 29.5% increase in sales volume (a gain of 147 transactions), Solano recorded a 14.6% drop in volume (a loss of 104 transactions) with a 19.6% increase in median sales price. The median sales price increased 28.8% in Contra Costa County, 10.2% in Napa.
As always, keep in mind that DataQuick reports recorded sales which not only includes activity in new developments, but contracts that were signed (“sold”) many months or even years prior and are just now closing escrow (or being recorded).
∙ Rate of Recovery for Bay Area Real Estate Speeds Up [DQNews]
∙ Recorded San Francisco Sales Volume Hits Six-Year Seasonal High [SocketSite]
∙ San Francisco Sales Activity Ticks Up In December, Median Ticks Down [SocketSite]