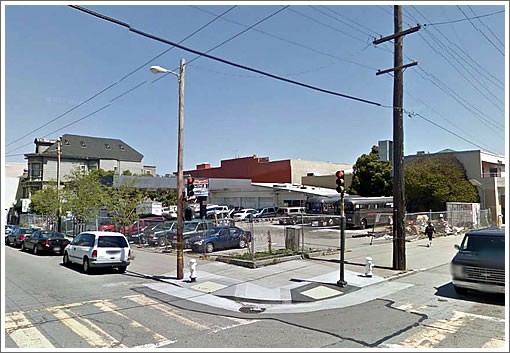 The gas station at the corner of 19th Street and South Van Ness Avenue stopped pumping gas at the end of 2004. An application to build five-story mixed use building upon the site was filed in 2005. And in early 2008, the construction of a 50-foot tall building with 29 dwelling units, 29 parking spaces, and 4,600 square feet of ground-floor retail, commercial space or Production, Distribution and Repair space was approved to be built at 793 South Van Ness Avenue:

As proposed the project would contain, 13 two-bedroom units, and 16 three-bedroom units. The residential lobby is provided off of 19th Street. The project sponsor intends to satisfy the Inclusionary Housing Requirement by providing the three (3) below-market rate units on-site. An approximately 11-foot wide garage opening would be located on 19th Street to provide ingress and egress to the residential parking.

Per the terms of Planning’s approval for the development, “Condition of Approval Number 11 deemed the authorization and rights vested…null and void if within three years…a site permit or building permit for the Project had not been secured by Project Sponsor.”

With three years having passed and the site permit which was approved in 2009 cancelled in 2011, the owners of the entitlements have dusted off their plans and are now seeking an extension of their window to start construction at 793 South Van Ness to October 2014.

Speaking Of Adding Floors And Altered Views: 680 Folsom Topped Out

You've Been Warned: Let There Be Less Light And Fewer Views