First approved for development in late 2008, the construction of 60 below market rate rental units for families at 474 Natoma Street off Sixth finally broke ground earlier this year, with 9-stories along Natoma and a 4-story building behind along Minna to rise.
Governed by San Francisco Planning Code Section 429, also known as “One Percent For Art,” the project requires a public art component valued at an amount equal to one percent of the hard construction costs for the project which are estimated to be around $25 million. 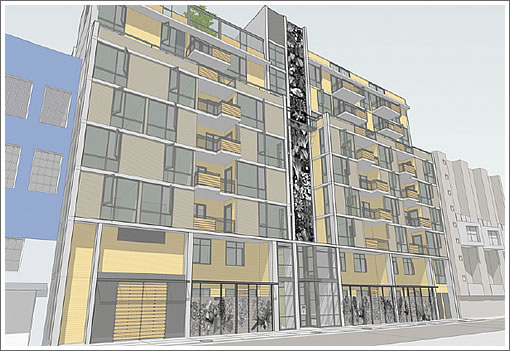 Catherine Wagner has been selected as the artist for the public art piece at 474 Natoma Street, an installation Ms. Wagner has given the working title of “Global Garden.”
The artist’s statement and overview of the piece:

For the new 474 Natoma Housing Development, I am proposing to work with the exterior of the elevator tower, spanning eight stories, creating an architectural frieze that references the notion of a home garden. In essence, a garden is a defined outdoor space with a range of uses and can serve myriad objectives, such as a demarcation of ownership, privacy, sacredness, and ornamentation. The garden also serves as a marker of domesticity, of metaphorically and physically planting one’s roots. The garden is symbolic of refuge, growth, and in the case of a condominium building, community.

My piece brings together culturally specific plants from disparate climates and locations that reflect the eclectic South of Market area. Plant images that represent the Philippines, India, China, the Americas, Africa and South East Asia intermingle on the full height of the elevator tower. Some species represented are particular to a region while others span cultures and climates, such as ginger, cilantro, hydrangea, and morning glory vines. The composition of the image garden, with its assemblage of plants, will take on a beautiful patterning which can be seen at a distance while the individual components are visible up close. Many panels will concentrate on a singular leaf structure in order to reflect the dynamism of that species. Working with the elevator tower’s verticality allows the gardens to be both immersive and cascade perceptually.

For this piece I propose to use a new and innovative low maintenance process of transferring images onto metal, called Ombrae. Using punched “pixels” that are angled and pointed to reflect a particular quality of light, the Ombrae System changes the topography of a surface in order to display a programmed image. Using my digital photographs of global plant imagery, the pixels, or “optical tiles” are formed out of an aluminum panel and attached with a simple substructure to the façade of the building. The appearance of the images shifts in relation to the light levels and the viewer’s position, creating a visually dynamic surface. The overall effect of the piece oscillates between representation and abstraction.

The idea of the garden becomes an iconic identification for the building. It serves not just in adding beauty but also contributes to the sense of home. This virtual garden will represent both what has been brought from other places, as well as the mixing and exchange of cultures that characterizes the residents’ and neighborhood’s present life. 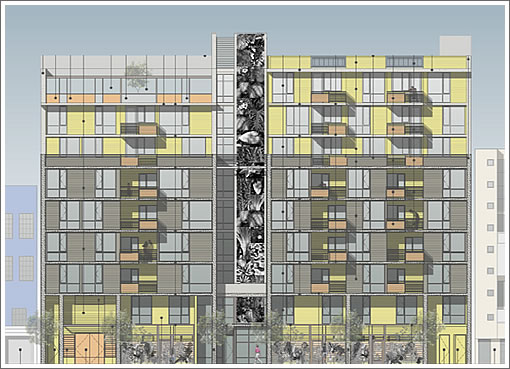