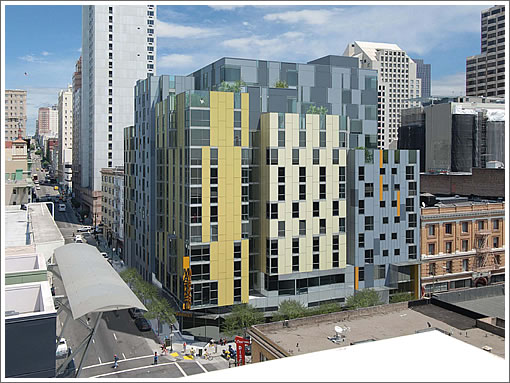 From Don Falk, Executive Director at Tenderloin Neighborhood Development Corporation (TNDC), with respect to the challenges of financing affordable housing development in San Francisco and the development of 168-186 Eddy Street at the corner of Taylor:

In a short time, we have seen dramatic changes in the world of affordable housing financing. The elimination of Redevelopment Agencies stripped $50 million of annual subsidy from San Francisco, and combined with State budget problems and long-term Federal deficit reduction, nonprofits’ ability to develop affordable housing faces more constraints now than any other time in the past 30 years. At the same time, the main sources of income for our senior and disabled residents—social security and disability—have been reduced multiple times.

Against this backdrop, San Francisco has become the most expensive rental market in the nation. While the economy is improving, this has not trickled down to affordable housing financing. The private real estate market cannot build for low income people profitably, so for San Francisco to remain a city for all – families and workers, not just the privileged – we cannot look to market rate developers to fulfill the need.

As a result of shrinking public resources, TNDC is thinking differently about how to finance affordable housing, and we are working on mixed-income developments at four different sites. Having shopped the site at the corner of Eddy and Taylor to multiple market-rate developers as potential joint venture partners, however, we know that new construction market-rate housing is not yet financially feasible there…though it’s a lot closer than it was a year ago, and we think we will ultimately succeed. Sites South of Market are significantly more viable than in the Tenderloin from a market-rate development standpoint.

Also noted by Mr. Falk, “TNDC has never opened a pot club in the ground floor of an SRO; perhaps someone is getting us mixed up with another organization” (as was intimated by another).

San Francisco Employment And Unemployment Both Tick Up In June

It’s All About (A Lack Of) Density