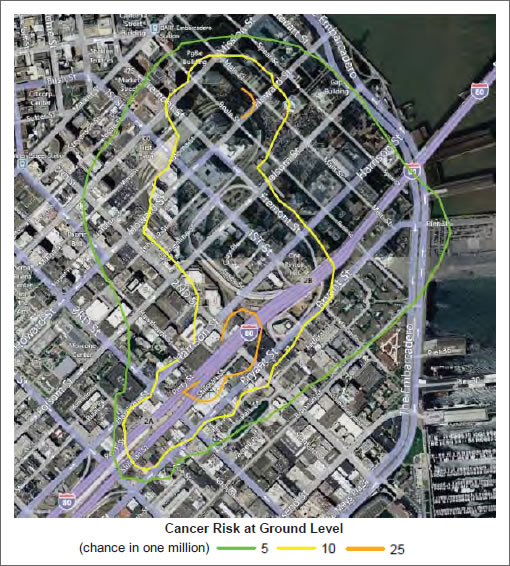 Speaking of the Plan for building out San Francisco’s Transit Center District, from the Plan’s Environmental Impact Report (EIR) with respect to the Transit Center’s estimated impact on air quality and resultant neighborhood cancer risk: 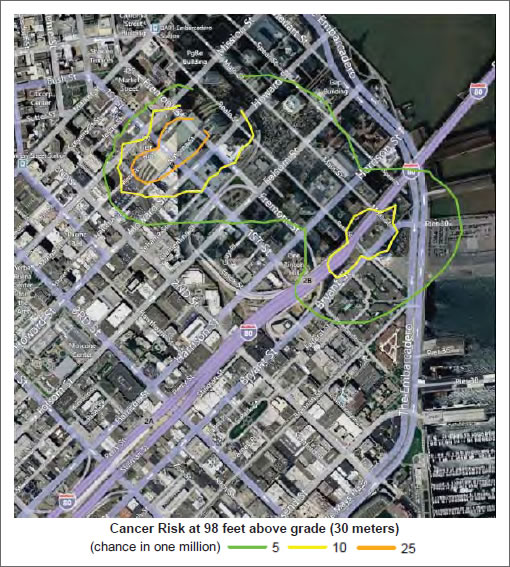 Subsequent residential development projects (and other projects with sensitive receptors) in these areas, therefore, would be subject to a potential significant impact from diesel bus emissions, exceeding the 10 in one million BAAQMD project‐specific guideline for a single source impact on new receptors. Therefore, these projects would likely have to implement mitigation measures, such as [installation of a filtration system].

These potential significant air-quality impacts due to exposure to roadway pollutants and stationary source risks, including PM2.5 concentrations and cancer and non‐cancer health risks, would be reduced with implementation of…an overlay zone in which site specific analysis or refined modeling would be required in advance of the approval of subsequent development projects that would include sensitive receptors, and that the Transit Center District Plan include “goals, policies, and objectives to minimize potential impacts.”

Mitigation [Measures] would also require that residential development projects in the Plan area be designed to reduce air quality impacts to residents through building design (e.g., ventilation and air filtration systems). This measure would apply to the entire Plan area because of the large number of permitted and unpermitted stationary sources—mostly diesel generators and boilers—and the high percentage of streets with traffic volumes that could generate relatively high concentrations of PM2.5 throughout the Plan area and vicinity.

Because the pollutant concentrations vary by location, it is not possible to conclude that Mitigation Measures would bring concentrations or the resulting health risks below the BAAQMD‐specified levels for each subsequent project with sensitive receptors. Therefore, this impact would remain significant at the Plan level after mitigation.