The Plans For The Old Firehouse At 1300 Third Street 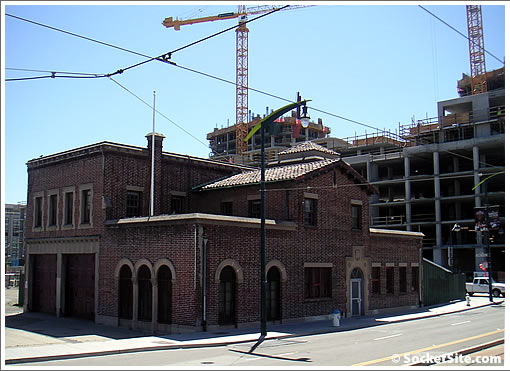 Designed by Frederick Meyer and finished in 1928, Fire Station No. 30 is a two-story steel-frame and masonry building located at 1300 Third Street, between Mission Rock and China Basin Streets with “Madrone” quickly rising behind.

The subject building has a concrete foundation, brick masonry walls, cement plaster and case stone trim, and a multi-level flat and gable roof with clay tile. At the ground floor, the fenestration consists of large, rectangular, multi-light steel-sash windows, some of which feature elliptical fanlights. At the second floor, the fenestration consists largely of two-over-four or three-over-three, multi-lite, wood-sash windows.

Other notable features include the wood-panel bi-fold doors, two fire truck entrances and the apparatus room. On the south façade, the subject building has a one-story, non-historic aluminum-shed garage addition added in the 1990s.

As proposed, the non-historic addition will be demolished, the exterior will be rehabilitated, and the former fire station will become a community center and office.

The majority of the interior character-defining features would remain and be reinstalled in the subject building, except for the wainscot in the eating room and apparatus room and the columns, pilasters (also identified as piers), and rafters in the apparatus room, which would be removed and replaced. The ceiling in the apparatus room would be lowered to accommodate new mechanical and electrical equipment. The interior would be reconfigured to accommodate offices, new restrooms, an entry lobby, and a large community room.

And yes, “the building would undergo a seismic retrofit consisting of a new structural steel frame and shotcrete reinforcement of the exterior brick walls.”

1300 Third Street Today And In The Context Of Tomorrow

Hot Or Not: Two Three-Year Apples A Block Apart On Twentieth