The Economist Calls Another Rather San Francisco Centric Bubble 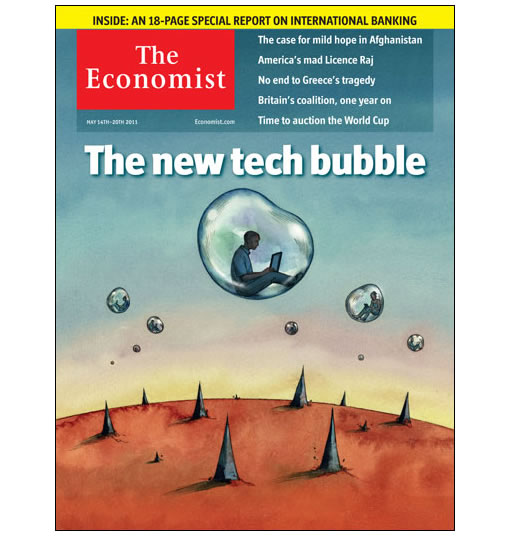 A few excerpts from the Economist’s current cover story, The New Tech Bubble:

“SOME time after the dotcom boom turned into a spectacular bust in 2000, bumper stickers began appearing in Silicon Valley imploring: “Please God, just one more bubble.” That wish has now been granted. Compared with the rest of America, Silicon Valley feels like a boomtown. Corporate chefs are in demand again, office rents are soaring and the pay being offered to talented folk in fashionable fields like data science is reaching Hollywood levels. And no wonder, given the prices now being put on web companies.”

“This time is indeed different, though not because the boom-and-bust cycle has miraculously disappeared. It is different because the tech bubble-in-the-making is forming largely out of sight in private markets and has a global dimension that its predecessor lacked.”

“Irrational exuberance rarely gives way to rational scepticism quickly. So some bets on start-ups now will pay off. But investors should take a great deal of care when it comes to picking firms to back: they cannot just rely on somebody else paying even more later. And they might want to put another bumper sticker on their cars: “Thanks, God. Now give me the wisdom to sell before it’s too late.”

And of course, the wisdom to understand the impact and potential outcomes on San Francisco’s real estate market if another bubble is indeed being blown.
∙ Irrational exuberance has returned to the internet world [economist.com]