A Quick Curb A-Peel Change For A Weathered Wooden Facade 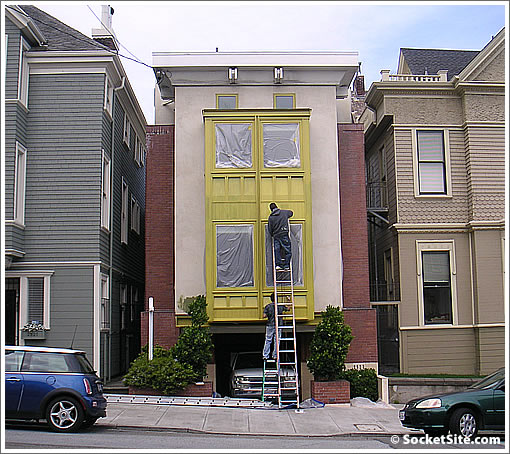 Three days ago the foreclosed upon 2523 Steiner hit the market and we promptly featured the property and its façade, the condition of which drew a few comments. Today, a plugged-in tipster catches the painters hurriedly at work before the first open house this weekend.

I did not previously know the house but only recognized the…facade from your post. I said to myself, “ah, there is that house that was on SocketSite.” Anyway, a paint crew is out there painting the wood portion of the facade. The color was banana yellow–let’s hope that will be the undercoat.

Well, we hate to dash your hopes, but that’s not an undercoat. And the rest of the non-brick portion of the façade will be receiving a coat of green, a little test patch of which you can see above the shrub on the left. Normally, people also have roofing work done by people like this roofing company austin tx as part of improving curb appeal when trying to sell a house, but it would be hard to see whether or not these owners have chosen to do this.

For the sake of consistency, we’re keeping all comments on our original piece. And once again, no April Fools (or Photoshop involved). Cheers.

A Call For Private Review Of Developer's Public Art

No April Fooling As 3362 Jackson Returns Swinging Like Pat Burrell