Giant Value Housing Or Headache To Come In The Mission? 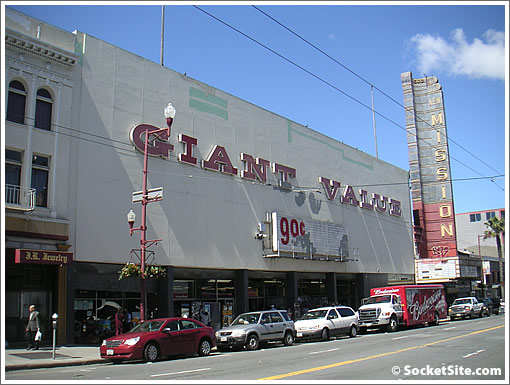 Having purchased the fully entitled housing site at 1800 Van Ness last year for $4.25 million, Oyster Development is now in contract to purchase the Giant Value store at 2558 Mission Street which hasn’t been entitled for development but was targeted for almost a hunderd housing units over 14,000 square feet of retail by seller Gus Murad.
From J.K. Dineen at the San Francisco Business Times:

The site has long been one of the most contentious in the Mission, if not the entire city. It has faced strong opposition from groups like the Mission Anti-Displacement Coalition, which fights market-rate housing development and anything that it regards as gentrification. The group has particularly targeted Murad, an ally of former Mayor Gavin Newsom whose restaurant has been a popular gathering place for elected officials.

Murad bought [the adjacent New Mission Theater] and the Giant Value store from City College of San Francisco in 2005 for $4.35 million. Last year he went into default on a $2 million loan to CCSF, the junior lender on the property. A trustee sale was scheduled for March 22, but that has now been cancelled, according to [Oyster President Dean Givas].

Murdad, who owns Medjool and had a Noe Valley home on the market last year, didn’t sell his stake in the theater which he hopes to redevelop “into an entertainment complex with movies, music and dining.”
∙ Copy That, 1800 Van Ness/1754 Clay Street Site Sells For $4.25M [SocketSite]
∙ Oyster tries to crack Mission [San Francisco Business Times]
∙ A Medjool Of A Modern Noe Valley Home (767 27th Street) [SocketSite]

From Quintessential To Designer And A New "$15,000" Kitchen