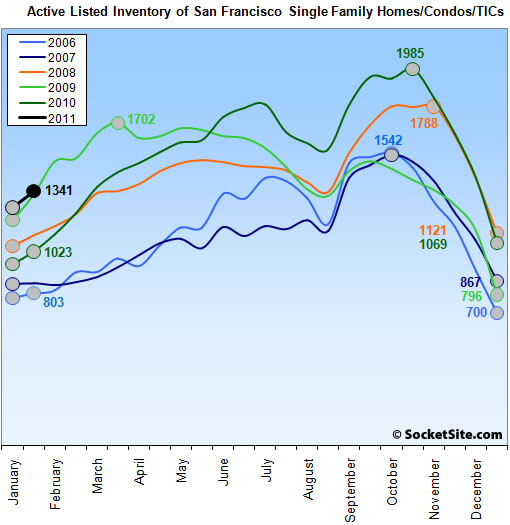 Inventory of listed single-family homes, condos, and TICs in San Francisco increased 6.9% over the past two weeks to 1,341 active listings. Over the past five years listed inventory levels have increased an average of 5.5% in San Francisco during the same two weeks.
Current listed inventory is up 31% on a year-over-year basis, up 24% versus the average of the past five years, up 67% as compared to 2006. At the same time, listed sales last month appear to have been just over 400, down a few percentage points year-over-year.
The inventory of single-family homes for sale in San Francisco is up 41% on a year-over-year basis to 544 while listed condo inventory is up 25% to 797.
The percentage of all active listings in San Francisco have undergone at least one price reduction dropped two points to 34% while the percentage of active listings that are either already bank owned (90) or seeking a short sale (192) dropped a point to 21%, down 10% on an absolute basis over the past two weeks.
Think “new” listings for previously unsold properties (with respect to the percentage of reductions) and holiday moratoriums (with respect to bank-owned activity).
The standard SocketSite Listed Inventory footnote: Keep in mind that our listed inventory count does not include listings in any stage of contract (even those which are simply contingent) nor does it include listings for multi-family properties (unless the units are individually listed).
∙ San Francisco Housing Inventory: Starting 2011 At A Six-Year High [SocketSite]
∙ Will Pent-Up Demand Outstrip Pent-Up Supply? [SocketSite]

Like The Swallows To Capistrano, 830 El Camino Del Mar Returns