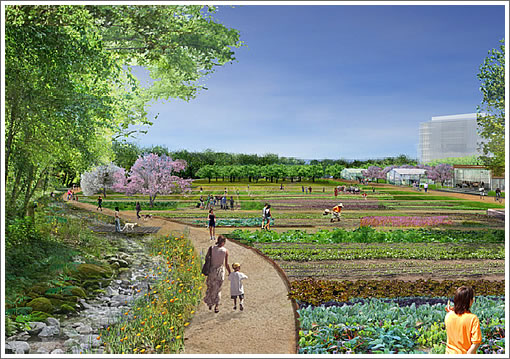 The proposed new neighborhood core [concentrated on Crespi Drive, near the northeast part of the site and the light-rail line] would be located within walking distance of all the residences within Parkmerced.

Small neighborhood-serving retail establishments would be constructed outside of the neighborhood core, in close proximity to residential units throughout the site. A new elementary school (to replace an existing one on-site) and daycare facility, fitness center, and new open space uses including athletic fields, walking and biking paths, a new organic farm, and community gardens would also be provided on the Project Site.

Infrastructure improvements would include the installation of renewable energy sources, such as wind turbines and photovoltaic cells.

The transportation system modifications proposed as part of the Parkmerced Development Project, as described in the Transportation Plan, would include rerouting the existing MUNI Metro M Ocean View line from 19th Avenue through the development, new and re-designed public streets, and modifications to intersections and streets around the perimeter of the site.

Off-street parking for the residential units will primarily, but not exclusively be in underground garages, and will be concentrated on the west side of the site (while units are concentrated toward the eastern half) to discourage casual usage.

This afternoon the Planning Commission will host an informational hearing and overview of the Parkmerced Project with a particular focus on the aforementioned urban design, open space, and sustainability.

A Cup Plan B And Latest Economic Impact Report