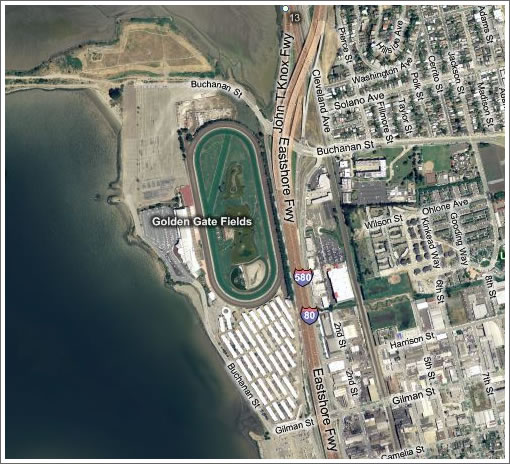 The bankruptcy related auction of Golden Gate Fields over in the East Bay has been scheduled for February 25, 2010. The 130-acre property has been unsuccessfully targeted for development a number of times.

Residents in Albany, a city of 17,000, have resisted previous development proposals and in 1990 approved zoning laws that limit the land’s uses to live horse racing, sports or water-related commercial development, restaurants, bars and open space. Hotels and housing, for instance, are forbidden. Any change to the zoning must be approved by voters.

The property currently generates over a million dollars a year in taxes for Albany’s general fund. And while a recent community survey reveals that most resident’s “do not necessarily want to see a racetrack there” going forward, “the vast majority want to see the tax revenue retained at the same level” and “everyone would like to see more open space.”

San Mateo’s Bay Meadows racetrack was shuttered fifteen months ago and quickly razed to make way for an 82-acre mixed-use development including 1,171 residential units, 715,000 square feet of office space and 93,000 square feet of retail space.  Construction, however, has yet to commence.