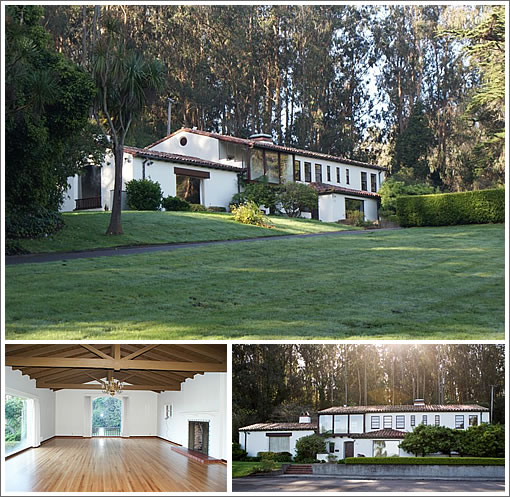 From the statement for 1332 Wright Loop:

Built in 1943 to accommodate the commanding general of the Ninth Coast Artillery District, this grand residence reflects a mix of Spanish Colonial Revival architecture and more modern elements of the period. Located in the Presidio’s Fort Scott area, above Kobbe Avenue, this secluded historic home has a grand entertaining space, 5 bedrooms, 4.5 bathrooms, 2-car attached garage and is a contributing feature to the Presidio’s status as a National Historic Landmark District.

Open this Friday and Saturday from 1-3PM and seeking a minimum bid of $14,000 per month, a plugged-in tipster adds: “Though not on the statement, I’ve heard the winning bidder will have to pay out of pocket to update the home (it’s old and not rehabbed).”
UPDATE (12/10): An aerial perspective for the property.
∙ The Wright Stuff Redux: Aerial Perspective And A Reader’s Report [SocketSite]

Take Two (And Big Cuts) For Thirty-Four At 188 King