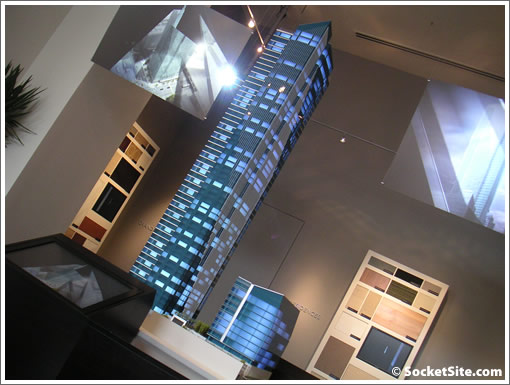 While you’ve probably already heard that one of the two top-floor (60th) penthouses is in contract for $11,000,000 (unfinished), and in total hard contracts have been written for roughly 60 condos (15% of the development), we offer up a few more sales facts about San Francisco’s Millennium Tower that might ring new.
∙ Hard contracts have been written on units ranging from $670,000 to $11,000,000.
∙ Majority of contracts for Grand Residences with an average price point of ~$2.5M.
∙ 98% of the contract holders are from the Bay Area (which doesn’t include France).
∙ 70% of the contract holders are planning on making Millennium their primary residence.
∙ The vast majority of contract holders plan on paying cash.
∙ No other penthouse units on the 59th or 60th floors are yet in contract (despite rumors).
The sales office remains “by appointment only.” And our favorite feature within said office, the scale model which lights up each individual unit to show its exact location in the building (along with virtual views and finishes projected overhead) as you navigate the development via a touch screen display.
∙ The Millennium: A Few Things You Might Know (And A Few You Don’t) [SocketSite]