The Rendering And Additional Details For The Giants SWL 337 Proposal 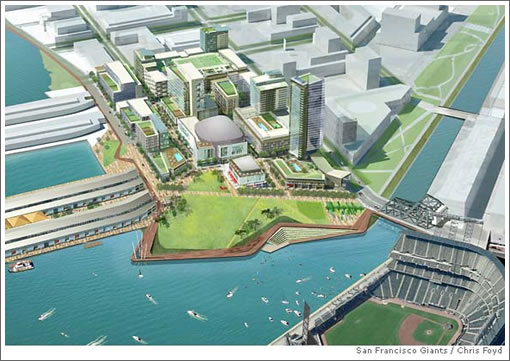 The Chronicle scoops up the rendering and a few more details for the San Francisco Giants’ proposal for development of Seawall Lot 337.

The Giants’ preliminary development proposal includes 875 homes, many of which will be in a 300-foot high-rise, 800,000 square feet of office space and a parking garage. The plan also features a 5,000-seat music hall, an entertainment district with restaurants, bowling and nightclubs, a 5-acre park and a refurbished pier available for staging trade shows and private events. Total development costs are estimated at more than $1 billion.

And while we’re all for the development, and would consider this an infinite improvement over what’s currently there, we have to admit we’re not getting that inspired by “Millennium Park” vibe (nor does it feel particularly bold).
At least two other design proposals are expected to be submitted. One from Darius Anderson, Boston Properties and Wilson, Meany, Sullivan which “would include 1,700 housing units and office space, but would also offer submarket rents for gallery space.” And one from Build Inc. and Urban Green Development which “features a green technology business incubator, offices and 1,600 homes” along with “artist studios, an art exhibition center, a wholesale market and parks.”
And to answer at least one reader’s question, regardless of which proposal is selected and approved, “construction would probably not begin for three or four years.”
∙ Giants among bidders to develop S.F. Port land [SFGate]
∙ Could This Be Curtains For Cirque Du Soleil In The City? [SocketSite]
∙ Seawall Lot 337 Proposal: Inspired By Chicago’s Millennium Park [SocketSite]