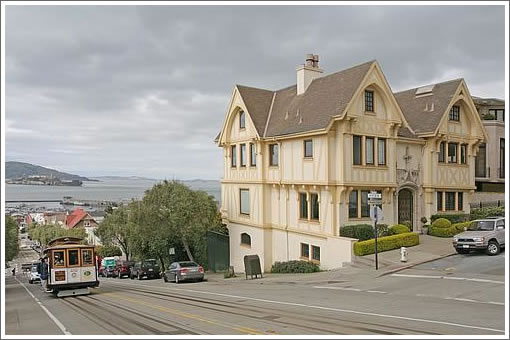 Well, it looks like our attempt to kick the weekend off on a somewhat lighter note has gone awry (and that Sleepiguy’s surprise was entirely justified). And contrary to what we initially reported twelve hours ago (so much for that scoop), 898 Francisco has not sold.

We repeat, 898 Francisco has not sold. Instead, the list price on the house has simply been reduced from $7,900,000 to $7,700,000. Our apologies for the confusion and any potential letdown (and yes, we know it’s awfully hard to re-cork that champagne).

It was nine months ago that we first reported the property hitting the market, and to which a plugged-in reader added that it was owned by Nicolas Cage (who had likely purchased the house and an adjoining parcel for $9,400,000 seven months prior). And all of one week later, the Wall Street Journal “scooped” us by reporting that the property had been taken off the market.

Four days later, however, we countered with the scoop on the property’s return. And now, after 273 days on the market, we can only report that the list price on the house has been reduced $200,000 (which really isn’t the story we had hoped to run).