David Ireland’s 500 Capp Street: Inside And Soon To Be On The Market 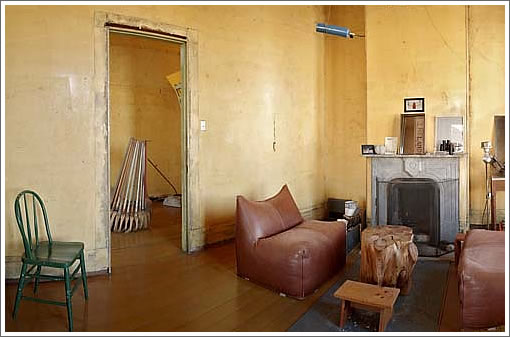 The inside of San Francisco artist David Ireland’s 500 Capp Street home has been chronicled in both print and video by Cal’s Regional Oral History Office. And according to the Chronicle, the living gallery will soon be up for sale.

To its neighbors, the shabby-looking 1886 Victorian on the corner of 20th Street probably looks like a holdout in the area’s slow march to gentrification. But the contemporary art world knows 500 Capp St. as the lodestar of David Ireland’s quirky, lyrical art, which has won him an international, though somewhat esoteric, reputation.

After a failed attempt by the San Francisco Museum of Modern Art to acquire the Capp Street house, arrange for its conservation and provide a lifetime income for Ireland, it is to go on the market this month.

The artist’s sister, San Francisco Realtor Judy Ireland, said she plans to offer the property at around $900,000. The rush to sell, she said, concerns a law expiring April 1* that would exempt the artist from tax on $250,000 of the considerable capital gain from the sale.

To quote John Elderfield (chief curator of painting and sculpture at the Museum of Modern Art in New York): “It would be great if some white knight rode in and took it over.” And bar that, all we ask is that they resist any recommendations to “stage.”
[*Editor’s Note: Don’t panic, as far as we know it’s not “the law” that’s expiring April 1 but rather Mr. Ireland’s ability to qualify for the primary residence capital gains tax exemption (he hasn’t lived at 500 Capp Street for going on three years).]
∙ Little-known S.F. gem may be lost [SFGate]
∙ Inside 500 Capp Street: An Oral History of David Ireland’s House (pdf) [berkeley.edu]
∙ David Ireland at 500 Capp Street: Real Player Video [berkeley.edu]

Thirteen More "Anecdotes" Of Distressed Listings In Districts 8 And 9

Another Contractor Comments On The Cost Of Construction In SF