Bay Area “Notices Of Default” Heading North? (So To Speak) 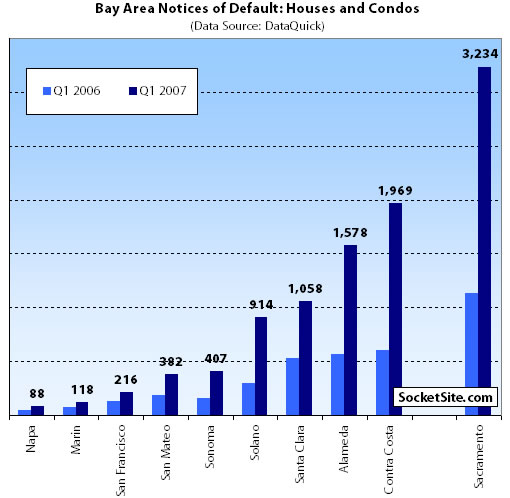 While a 67.4% year-over-year increase in San Francisco Q1 “Notice of Default” activity sounds dramatic, in absolute terms it still represents relatively few properties (216). Within the greater Bay Area, however, Contra Costa hit a record level of Q1 default activity (1,969 notices, up 225.5% year-over-year) as did Sacramento (3,234 notices, up 184.7% year-over-year). And Alameda isn’t too far behind (1,578 notices, up 179.8%).
According to DataQuick, “[t]he number of default notices sent to California homeowners last quarter increased to its highest level in almost ten years, the result of flat appreciation, slow sales, and post teaser-rate mortgage resets,” and “[m]ost of the loans that went into default last quarter were originated between April 2005 and May 2006.”
And while most homeowners “emerge from the foreclosure process by bringing their payments current, refinancing, or selling the home and paying off what they owe…about 40 percent of homeowners who found themselves in default last year actually lost their homes to foreclosure in the first quarter.” That’s up from nine percent at the same time last year.
Keep in mind that long-term interest rates remain near historic lows, and according to most, the Bay Area economy remains strong (and incomes are up).
∙ California Foreclosure Activity Jumps Again [DQNews]

It’s All About Upside (And Whether Or Not You Believe)

The American Institute Of Architects’ Top Five In San Francisco