The Tallest Residential Tower West Of The Mississippi Los Angeles! 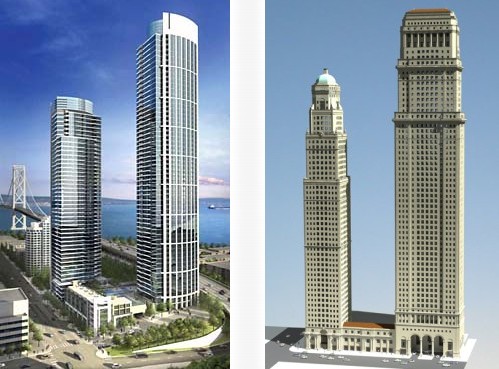 A tipster forwards a piece from the Los Angeles Business Journal:

The Titan Organization Inc. has taken another step towards building its pair of $500 million luxury apartment towers in downtown Los Angeles’ South Park district.
The company, formerly known as Rodmark Inc., has closed escrow on a 58,000-square-foot property at the southeast corner of Grand Avenue and Olympic Boulevard where the Olympic and City House will be built. The towers will be tallest residential buildings on the West Coast when completed.

We only mention it because…well you have probably already figured it out. At 60-stories, the taller of the two proposed L.A. towers will rise five stories higher than One Rincon Hill’s fifty-five.
Perhaps it’s simply a difference in how they’re counting stories (some special developers math?), or perhaps we can still win out on some technicality (highest occupied floor? total elevation? anybody?), but if not, the days of One Rincon Hill (and San Francisco) boasting the “tallest residential tower west of the Mississippi” might already be numbered.
∙ Olympic and City House Design [robertsonpartners.net]

Keeping Our Eyes On The Upper End Of The Market

Reductions At The Infinity?