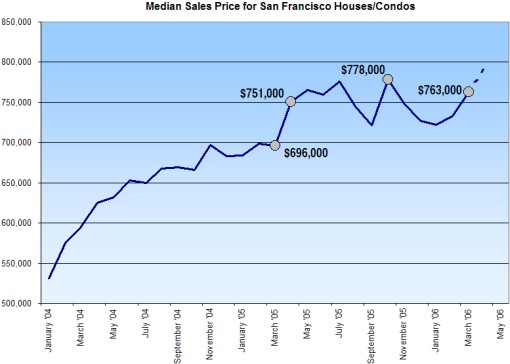 Trying to predict the market is often considered a fools game, but we don’t see any reason to let that stop us. Two weeks ago we promised our commentary and insight into DataQuick’s March sales stats for San Francisco, so here we go…
While median sales prices in San Francisco trended up 4.1% to $763,000 in March ‘06, and recorded a very respectable 9.6% year-over-year gain as compared to March ’05 ($696,000), the real story is that they’ve been relatively flat for the past eleven months. In fact, compared to April ’05 ($751,000), the San Francisco median sales price is up only 1.6% (and is still 1.9% below its peak of $778,000 in October ’05).
Now granted, it’s not unusual to see an up-tick in median sales prices from March to April, but even with another 4% gain over March, San Francisco will record year-over-year appreciation of below 6% next month. And based on a two-year linear forecast, the outlook is even more dire: a year-over-year appreciation of 4%.
That’s right, for the first time in years, we just might see the rate of home price appreciation dip below the cost of borrowing (i.e. mortgage rates). The impact? You’ll just have to stay tuned for Part 3 (later this week Monday Thursday).
∙ DataQuick Reports Part 1: The Basic Report [SocketSite]

Bathroom (And Market) Of The Rich And Famous