ACT(ing) Out: 970 Market Street Site Hits The Market Sans An Arts Use

Over the past two years, the Tenderloin Economic Development Project (TEDP) has been advocating to secure the three Mid-Market parcels between 966 and 974 Market Street for the development of an “arts & education facility with retail, restaurant and residential uses” with the American Conservatory Theater (A.C.T.) as a partner.
Having been in negotiations with the Loan Star Fund, the Dallas based hedge fund which acquired the parcels out of distress a few years ago, and having seemingly secured a soft agreement to incorporate TEDP’s arts and education vision into any development, Lone Star suddenly went silent at the end of last year and quietly listed the parcels for sale as “970 Market Street” with bids due by February 15, 2013.
While not yet entitled for development, the offering memorandum for the 25,557 square foot site with over 100 feet of Market Street retail frontage notes “the potential for over 250 residential units or over 250,000 gross square feet of office and retail space.” 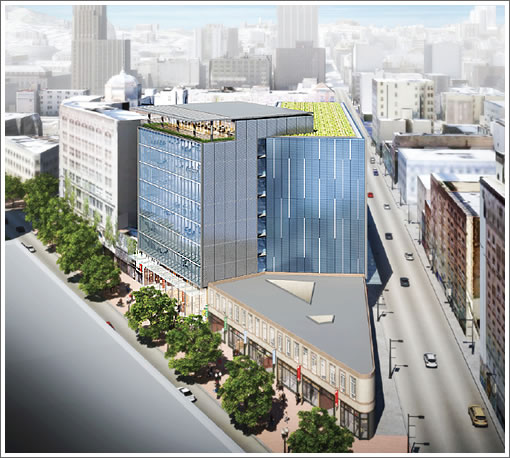 In response to TEDP’s confronting the hedge fund over bad faith negotiation practices the mayor [has] decided to host a breakfast with developers that may be interested in the site to impress upon them the importance of and the city’s support for arts & culture.

The breakfast meeting is scheduled for this Wednesday.

Apple Has Reportedly Set Their Sights On This Castro Street Site