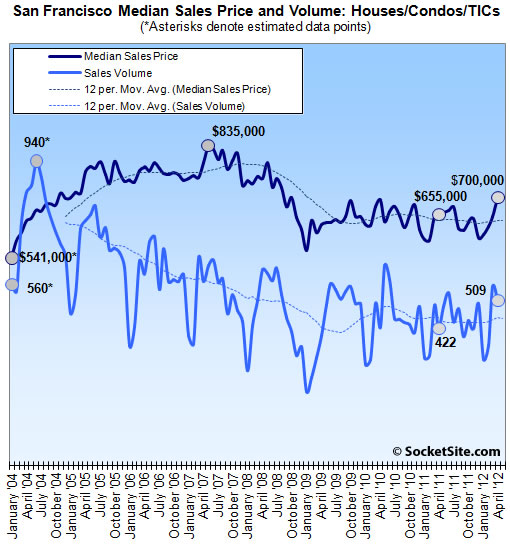 Last month distressed property sales – the combination of foreclosure resales and “short sales” – made up about 40 percent of the resale market. That was down from about 44 percent the month before and 45 percent a year ago.

Short sales – transactions where the sale price fell short of what was owed on the property – made up an estimated 18.1 percent of Bay Area resales last month. That was down from an estimated 18.9 percent the prior month and up from 17.4 percent a year earlier.

At the extremes, San Mateo recorded a 34.1% increase in sales volume (a gain of 199 transactions) on an unchanged median sales price while Solano recorded a 1.9% decrease in sales (a loss of 11 transactions) with a 5.4% drop in median price. The median sales price fell 6.4% in Marin, the biggest Bay Area drop, as sales increased 21.2%.
As always, keep in mind that DataQuick reports recorded sales which not only includes activity in new developments, but contracts that were signed (“sold”) many months or even years prior and are just now closing escrow (or being recorded).
∙ Increase in Bay Area Home Sales and Median Price [DQNews]
∙ Recorded San Francisco Sales Up 11.3% In March (Year-Over-Year) [SocketSite]

A Foreclosed Upon Noe Home Sells For Over...What Wells Was Owed