Hidden From The Street And Public Records 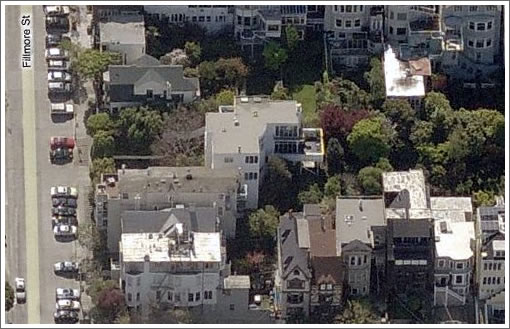 With a façade and size that’s mostly hidden from the street, the very quiet sale of 2845 Fillmore closed escrow last month with a recorded contract price of $11,000,000, generating $275,000 in transfer tax in a deal that was mostly hidden as well.

Never officially listed, the buyer of the Pacific Heights home has been hidden behind the 2845 Fillmore Trust which is being administered by the same attorney in Palo Alto who attempted to hide the buyers of 2600 Pacific.

While tax records suggest the property is 3,681 square feet, at which the sale would have been at $2,988 per square foot and a new all-time record in San Francisco, the property has been remodeled and expanded a number of times since being built in 1939 (including a horizontal extension in 1987) and we can’t confirm the current square footage.

As best we can tell, however, it was an all cash transaction.