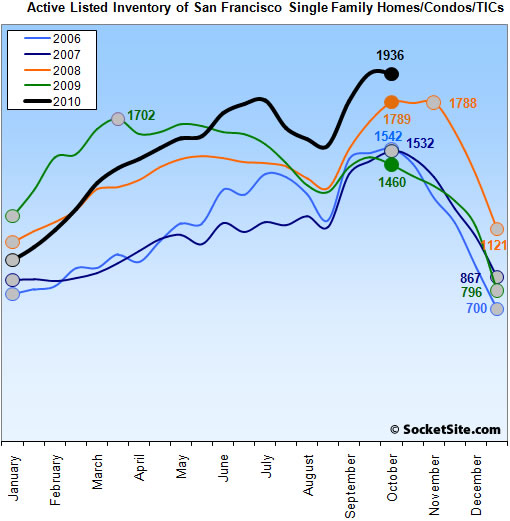 Inventory of listed single-family homes, condos, and TICs in San Francisco fell a nominal 0.5% over the past two weeks. On average, inventory has increased 2.0% during the same two weeks over the past four years and declines sharply over the next two months on sales and withdrawn listings.
Current listed inventory is up 33% on a year-over-year basis, up 18% versus the average of the past four years, and up 26% as compared to an average of 2006 and 2007. At the same time, listed sales in September (342) were down 13% on a year-over-year basis but versus a 30% year-over-year drop in listed sales in August (362).
The inventory of single-family homes for sale in San Francisco is up 44% on a year-over-year basis to 775 while listed condo inventory is up 26% to 1,161.
37% of all active listings in San Francisco have undergone at least one price reduction and the percentage of active listings that are either already bank owned (88) or seeking a short sale (178) is 14%, down 2% on an absolute basis over the past two weeks.
The standard SocketSite Listed Inventory footnote: Keep in mind that our listed inventory count does not include listings in any stage of contract (even those which are simply contingent) nor does it include listings for multi-family properties (unless the units are individually listed).
∙ A New High For Listed San Francisco Housing Supply [SocketSite]