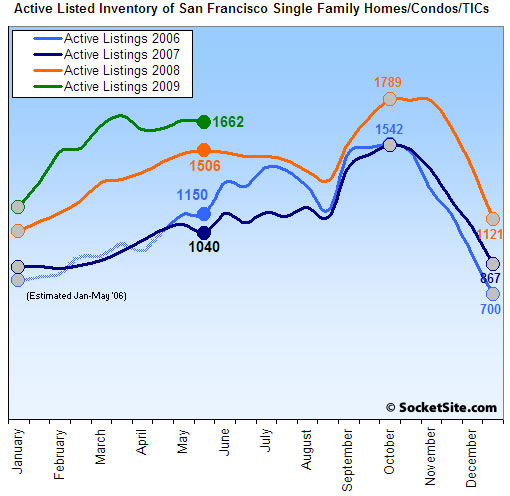 Inventory of Active listed single-family homes, condos, and TICs in San Francisco decreased a nominal 0.6% over the past three weeks (versus an average decrease of 1.2% for the same three week period over the previous three years) and is now running 10.4% higher on a year-over-year basis (down 6.3% for single-family homes and up 22.4% for condos/TICs) and 44.5% higher than at the same point in 2006.
The standard SocketSite Listed Inventory footnote: Keep in mind that our listed inventory count does not include listings in any stage of contract (even those which are simply contingent) nor does it include listings for multi-family properties (unless the units are individually listed).
∙ SocketSite’s San Francisco Listed Housing Inventory Update: 5/11/09 [SocketSite]

Now THAT’s Not The Arquitectonica Design For Market At Buchanan